Walking as a Form of Critical Curating

Walking is the simplest and most elementary form of human movement. Unlike more advanced forms of transportation, such as travelling by car, train, boat or plane, it allows a special kind of freedom: one can stop, take a  rest or change direction anytime. Regardless of the next service area, the next train station, harbour or airport.

This kind of freedom seems to be losing in value. In the age of highly developed mobility and fast connections, walking cannot compete with other forms of transport. The need of getting from A to B as fast as possible has become a fundamental paradigm to the modern idea of freedom. Movement is determined more quantitatively than qualitatively. Thisshift in the understanding of moving and travelling holds an opportunity to reconsider and investigate anew the role and importance of walking in everyday life. When the actof walking is losing its direct function – namely to get from one place to the other, it achieves a new one.

This can be observed and analysed best with the notion of strolling. 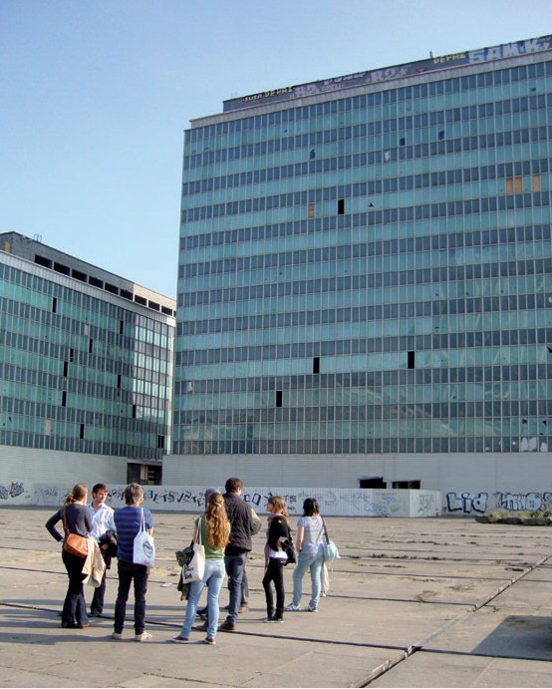 In its more traditional meaning strolling consists in a movement through a space, which is not guided by a particular goal or intent and is usually conducted solely for pleasure. In Harald Neumeyer’s terms "Strolling is a form of random going; it is a going, which — regarding the arrival at a specific place or the crossing of a particular space — is to be  understood  as  directionless  and  aimless;  it is also a going, which disposes freely of time."1

Even though strolling contains the idea of movement in its core, it is important to consider that one becomes a stroller less out of a need to move, but to see and to perceive the surrounding  environment.  Lucius  Burckhardt’s2 theoretical inquiry on the  nature  of  the  stroll brings  the  discussion in a new direction. Although it always includes a playfulcomponent, the stroll does not immediately coincide with a funny, worriless ramble through a city. According to the founder of the Spaziergangswissenschaft (Strollology) the stroll has to be understood as a valid instrument for investigating environments and developing knowledge. As the stroll assumes such a relevant function within Burckhardt’s theory, itbecomes the central method of the Spaziergangs- wissenschaft. This aims at the exposure of undetected parts of the environment on the one hand and at the critique of conventionalprocesses of perception, which preclude new perspectives on the other.3

Instead of the abstract view "from above", the strollologist tries to decipher the city "from below", through his or her physical experience of moving through urban space on foot. Inthis sense Burckhardt wrote, "The intention of the walks is thus to counter the stereotype views of city the planners […] with the real views of the citizens."4

With this in mind, the Spaziergangswissenschaft can be considered as a form of critical curating. Critical curating can be understood as a chance to ask questions about pressing topics ofour time, while encouraging new perspectives by means of contemporary art projects. So  it is possible  to  claim a certain proximity between critical curating and the intents of the Spaziergangs- wissenschaft. Both try to further a more conscious and independent perception of "landscapes" (also conceived in a metaphorical sense).

This is what we tried to achieve with kunstpassanten, a curatorial and educational project  realized  2009-2010 in Zurich, in collaboration with Fabriktheater Rote Fabrik and the Institute for Contemporary Arts Research of the Zurich University of the Arts (IFCAR). 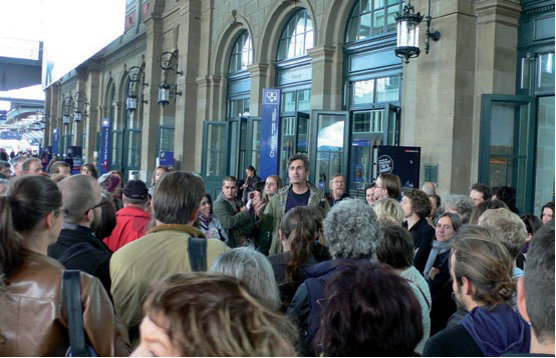 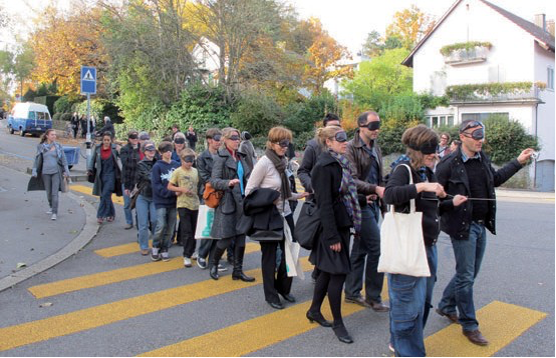 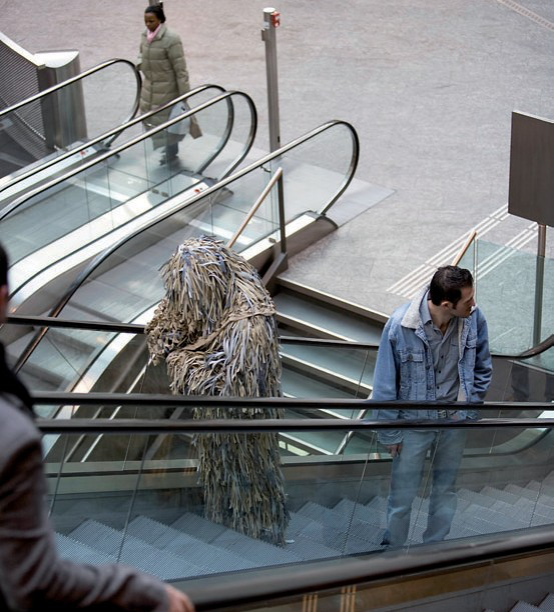 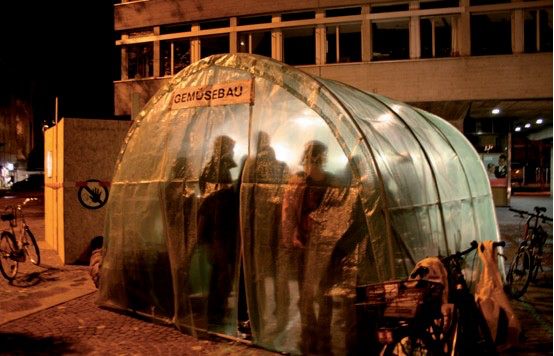 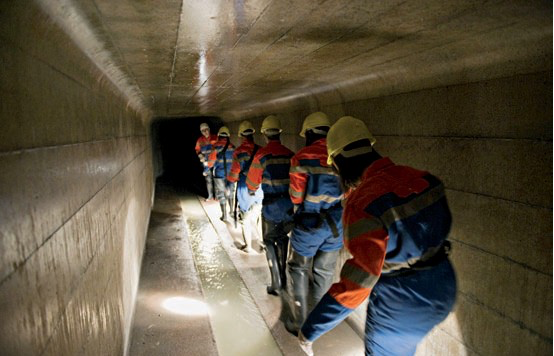 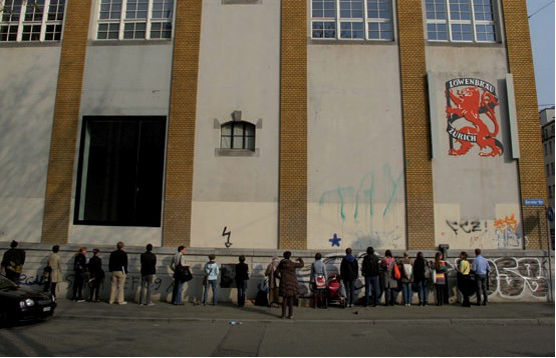 Walk no.8, Karin Frei Bernasconi with Victorine Müller, ONCE UPON A SPACE. Photo: Robbert van Rooden 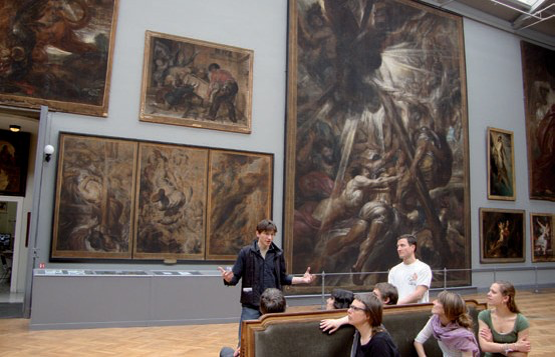 kunstpassanten — Walks through the Public Realm of Zurich

kunstpassanten examined the question of how the format of the walk can be considered and employed as a form of artistic and curatorial practice.

The project investigated the process development and the definition of public realms, as well as the possibilities of improving these processes with public art. In particularwe were interested in the following questions: How are artists, theoreticians, and citizens of the city of Zurich perceiving public space? What do they tell about their experience?How do works of art become part of the public sphere in their tales? What images of public  space  are being established? kunstpassanten also aimed to introduce a new practiceof how art can be exhibited and perceived: instead of a conventional visit to a museum or gallery, participants took collective walks  through  the  public realm, which wasrediscovered as an exhibition space.

kunstpassanten consisted in monthly walks, designed and conducted by artists and theoreticians who were invited to broach the issue.  It is important  to  note  at  this  point, that akunstpassanten - walk differs from the traditional guided tour. Not only in terms of audience involvement, but also in its aim: A guided tour is primarily designed to impart knowledge, whereas a walk is destined to sharpen the stroller’s perception. In this respect, the kunstpassanten - walks are to be understood less as didactic lesson than as a discursive experience.

In order to create the condition for such a  situation,  we asked the invited artists and theoreticians to call in a collaborator of their choice. The idea was that during the walk, adiscourse could emerge between the two, with the participants allowed to join in. This open structure was a deliberate choice in order to broaden the scope of the project by  involving  artists and  theoreticians  who  were not directly invited. This curatorial proposition has beenconceived and acted out differently and has, in some cases, also been dismissed entirely for conceptual reasons.

To kick off the project, we invited the Rumanian artist Daniel Knorr who asked the participants to explore the city from a garbage point of view. During three walksthey collected flat, worthless objects from the streets for Knorr’s artist book Cudesch d’artist, published on the occasion of his solo show at Kunsthalle Basel in September 2009.

The walk with San Keller, a performance artist based  in Zurich, was the actual beginning of the project in October 2009.  He  turned down  the curatorial proposition of including a so called "expert" in the conception of the  walk:  San Keller assumed that the citizens of Zurich possess the adequate competence to talk about the function and theaesthetic effect of art in the public sphere. San  Keller decided to sketch the route on the spot with the participants and to distribute the honorary fee of  the  absent  "expert" andhis own among the people who actively contributed, by telling about a public piece of art of their choice. We consider this six-hour walk as exemplary for the project, becauseof the mixture of academic, emotional, polemic, didactic and informative speeches. This brought us to a broad range of  possible ways to talk about the city and the conception of public space.

We organized eleven walks with the following artists and theoreticians:Daniel Knorr, San Keller, sp]Laura Kalauz with Diana Rojas, Knowbotic Research, MarinaBelobrovaja, Kunsthaus Aussersihl, eggerschlatter, Stefan Wagner with Georg Keller, Karin Frei Bernasconi with Victorine Müller, !Mediengruppe Bitnik, Adrien Tirtiaux and Christian Ratti with Simon Gaus. They differed greatly in duration, routes and content. Some of them were performative, others informative in nature. Some were critical and some more playful.

After each walk we developed an online documentation in collaboration with the artists and theoreticians. This represents a central element  of  the  project  and  constitutes its ownexhibition format (www.kunstpassanten.ch/en/ dokumentation). The idea was not only to create an archive of  the  conducted  walks,  but  to  create  a  real  alternative to avisit in a museum. A mapped, online-route of the walk serves as a basis for each documentation. Speech bubbles pop up at each stop and contain different media such asimages, audio files, drawings or videos. The documentation was adapted from the actual walk in order to fit the needs of the lone or collective stroller, who desires toreexperience a kunstpassanten - walk at any given moment in the future.

Maren Brauner (*1981 Bamberg, Germany. Lives and works in Zurich and St. Gallen since 2001.), since 2008: Assistant Curator at Kunst Halle Sankt Gallen. 2007 – 2008 Assistantto the head of communication at the Zurich Museum of Design. Since 2001: Working experience at museums, galleries, and publishing houses in Zurich and Berlin. 2007 – 2008:Postgraduate Program in Curating (CAS) at the Zurich University of the Arts (Degree: Certificate of Advanced Studies CAS. Title of master thesis: Out of the Depot. A Relecturing ofCollections by Artists). 2001 – 2006: Studies of Media and Communication Science, English Literature and Art History at the Universities of Zurich and Valladolid (Spain) 2006.

Irene Grillo (*1981 Maniago, Italy. Lives and works in Zurich and Basel since 2007.), Assistant at the Master of Arts at the Zurich University of the Arts. July – December 2009: sub.manager and assistant at [plug.in], Basel. February – June 2009: assistant at Kunsthalle Fridericianum, Kassel, in the context of the exhibition project Spring by Pawel Althamer andthe exhibition Fomuška by Micol Assaël. April 2008 – January 2009: assistant at [plug.in], Basel. 2007 – 2009: Postgraduate Program in Curating (MAS) at the Zurich University of the Arts (Degree: Master of Advanced Studies MAS. Title of master theses: Perspectives of Walking as an Artistic and Curatorial Form; Public Places and Rooms. A Research of the ‘being public’ of Art in the Public Sphere.). 2007: workshop for curators at Galleria A + A (Slovenian Pavillon at the Biennale) in Venice. 2001 – 2006: Philosophical Studies at theUniversities Ca‘ Foscari in Venice and Freie Universität Berlin. 2006: Degree in Philosophy.

2 Lucius Burckhardt (* Davos 1925 – † Basel 2003) was a Swiss sociologist and planning theorist. He is considered to be a mentor of the urbanism’s critique  of  the 60s and 70s  as well as the developer and founder of the Spaziergangs- wissenschaft (Strollology). Burckhardt’s interests  and areas of research are the perception processes of cities and countries, as well as  their  effects on the urban planning. In his theories Burckhardt developed a drastic critique of the consumer-driven manipulations of cities and a rejection of the programmed life of modernism. On this point we can see correlations be- tween Burckhardt’s theories and the urbanism’s critique promoted at the same time by the Situationist International, for instance in the concept of the dérive and the concept of psychogeograpy.

by Dorothee Richter and Rein Wolfs

Curating Theory (Away) the Case of the Last Three Documenta Shows

A Platform and Some Projects, Postgraduate Program in Curating, Zurich

Walking as a Form of Critical Curating

by Renata Stih and Frieder Schnock

Who Needs Art, We Need Potatoes

Contemporary Art and its Institutional Dilemmas

A Series of Acts and Spaces

Just What is it That Makes 'Curating' so Different, so Appealing?