I left my country, Syria, in 1983. I used to visit Damascus a few times a year to spend time with family and friends. I never thought that one day I would not be able to go back. Since the start of the revolution on March 15, 2011, I was banned from returning because I sided with the revolution against the fifty years of Assad dictatorship rule.

The revolution faced unprecedented violence from the Syrian regime. As a result, millions of people have been forced to flee their homes. Currently, there are over eight million internally displaced refugees, and more than six million Syrian civilians living in various countries around the globe, among them a big number of the Syrian artists, the artists who I used to visit in Syria are now scattered in Europe. All of sudden, as an art curator, I felt the urge to save the artists’ archive in my country, a project that I started to work on with the New York Abu Dhabi University center, and more than ever, I felt the need to document their lives. One such artist is Allam Fakhour.

Arriving in Neuchâtel, Switzerland, as Syrian refugees on December 15, 2015, Allam Fakhour and Mervat, his wife, thought, “Finally, we are in a safe haven.”

In just two years, Allam learned the German language while looking for a job in what he knows best, sculpting. From the year 2000, Allam practiced sculpting with different materials. In 2003, he graduated from the Fine Arts Faculty in Damascus University, sculpture department. In 2006, during what is known as the Damascus Spring, Allam was jailed in Damascus along with seven other activists for promoting democracy and defending human rights. He was sentenced to five years and was released in March 2011. During his time in jail, the artist created a material from soap and bread to produce small sculptures: “Doing sculptures made me feel that I am still a human, that I am still alive,” he reports. Sadly however, the sculptures he made during his time in jail were either offered to his cell mate or lost.

After his release, Allam was involved in the Syrian revolution by helping displaced people, an act seen as a crime by the Syrian regime. In 2013, the artist met Mervat who soon became his wife. The couple escaped to Beirut, Lebanon a year later. In Beirut, Allam revisited his memories in jail by creating a few sculptures from soap and bread, the very materials he used then (fig. 1).

Allam and his wife then submitted an application to the UNHCR and were granted asylum in Switzerland. 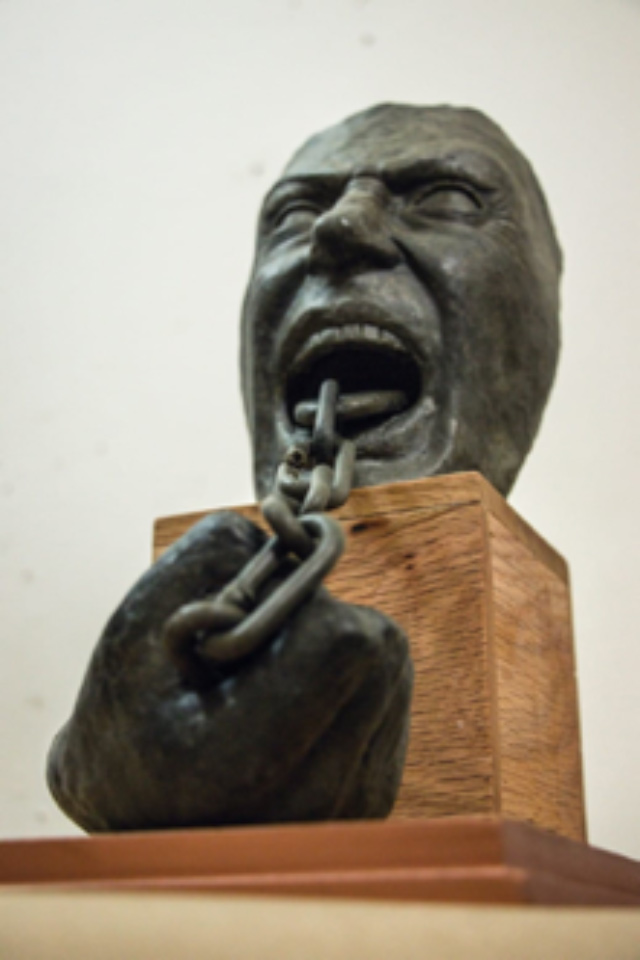 The Swiss Government lodged the couple in Neuchâtel for a month, then moved them to their new home in Haslen, a small village in the Alps, part of the Glarus canton, near Zurich, populated by a few hundred people and covered with snow five months a year. The government offered them a two-bedroom apartment, in which Allam transformed half of the space to an atelier. Excited to have a new life, they started to learn German, and made finding a job their daily mission.

Luckily, after twenty months of searching, and three months of training, Mervat became a sous-chef, a job she is currently enjoying.

Allam was not as lucky in his search. In addition to sculpting artworks in Syria, Allam worked with interior designers executing clients’ orders to decorate houses and gardens with sculptures, a work that gave him a good standard of living. Considering his background, Allam hoped to fall under a similar career path in Zurich.

Learning the language allowed the artist to meet with a few Swiss locals and institutions, but unfortunately, this did not aid in finding work. He sensed that he was being looked at through the lens of a stereotype, a needy Middle Easterner, someone who doesn’t know anything and is nothing but a refugee from Syria.

With the continuous war news coming from his hometown, and the disappointments of not finding employment while depending on the social pension, Allam felt trapped in in an unfamiliar space, with no hope for a better future, which lead him in a downward spiral to depression, as he says, “So, I decided to train my mind and my soul that I am not an artist, will never be one, and I have never seen art in my life.”

After about a year in Haslen, Allam moved to Nafels, a bigger town in the same canton. To his dismay, despite having a higher education with an attested degree from Damascus, many employers in Switzerland did not accredit his degree, and required four years of Swiss education instead, like many others in his position. Therefore, during the following months, he taught himself how to become a cleaner, a profession that does not require an education, one where he could easily be recruited. He compared himself to his fellow refugee artists in France and Germany, who reportedly did not confront as many difficulties as he did. On this note, I asked the artists Rim Yassouf and Khaled Dawwa who both sought asylum in Paris on how their first years were; they stated that there are a few French associations that support refugee artists, such as The Agency of Artists in Exile, which offered the artists residencies and introduced them to galleries where they get the chance to exhibit their work. In contrast, Allam was forced to leave behind a part of his identity, “I was killing the artist in me to be able to work as a cleaner.”

In June 2018, Allam faced a turning point in his artistic path. An association in Haslen called Asylbetreuung Glarus asked Allam to design the canton’s poster for the World Refugee Day, which he did in watercolor. In the June 23 issue, the local newspaper Südostschweiz covered the event, included the biography of Allam, and stated how the artist fled Syria and arrived in Switzerland with his wife in 2015.

Seven months later, Allam got a call from the UNHCR, the UN Refugee Agency,

informing him that the UNHCR had established an initiative called, “Art Stands With Refugees,” and that on the occasion of World Refugee Day, the agency would take part in Art Basel 2019. Organized by Alfredo Jaar, international artists were asked to create a series of posters, and Allam Fakhour was selected among the participants. The 2019 initiative was dedicated to refugee women, titled, “Where should birds fly after the last sky?”

Allam created a poster about a little Syrian refugee girl he saw in the news. Upon the girl’s arrival in Germany, a reporter asked her about her dreams in Germany, to which she replied, “I don’t want Germany, I wish I have wings to fly away from the globe, I want to fly to another planet.”

A week after the UNHCR call, Thomas, the owner of a newly opened gallery in Zurich called Hard Cover contacted the artist and asked for a meeting.

Despite taking part in some artistic content, Allam was experiencing a deep depression, one where going back to the abandoned artist in him seemed like an impossible reach. Despite Allam being a sculptor, Thomas offered Allam a solo exhibition for paintings, and with enough patience and determination, was able to reach out to Allam, reinstilling some confidence in him. As a result, Allam hesitantly accepted the offer to exhibit paintings and, staying true to his form, also exhibited one sculpture using soap and bread. “The opening of the exhibition was an awakening for me, I realized that I did not work for four years,” Allam said.

All artists who were in prison, once out, drew and sculpted their experiences in jail. Therefore, it is not surprising that Allam carried the prison’s trauma with him to the Swiss art scene. Using art to heal from a trauma is a known practice in psychology. According to professor and art therapist Paula Howie, art therapy is a method used to help patients heal from traumatic experiences, it “transforms the images from unfinished (seemingly present) experience to past history.”

I personally had the chance to visit the exhibition at Hard Cover gallery in Hardplatz, where the welcoming gallerist offered me an exhibition tour. The black and brown simple lines reveal sad, long faces staring at the viewer; they are the artist’s friends in jail. Some are jammed together on the window to see the street while being transported between prisons, others are squeezed in a black void background. (figs. 2 and 3)

According to human rights organizations, today there are more than 200,000 political prisoners in Syria. In addition, tens of thousands of detainees lost their lives under torture in Assad prisons.

More than fifteen artists were imprisoned during the Syrian Revolution, some were lucky to survive prison, three were not.

Today, the artist is preparing for a new exhibition. When I asked what the subject of his exhibition was, he said, “I am done with war and pain, it is behind me now.” He is working on colorful abstract artworks.

After few years of despair, Allam considers himself very lucky. With the help of the UNHCR and the gallerist, he was able to get up on his feet and practice art again. 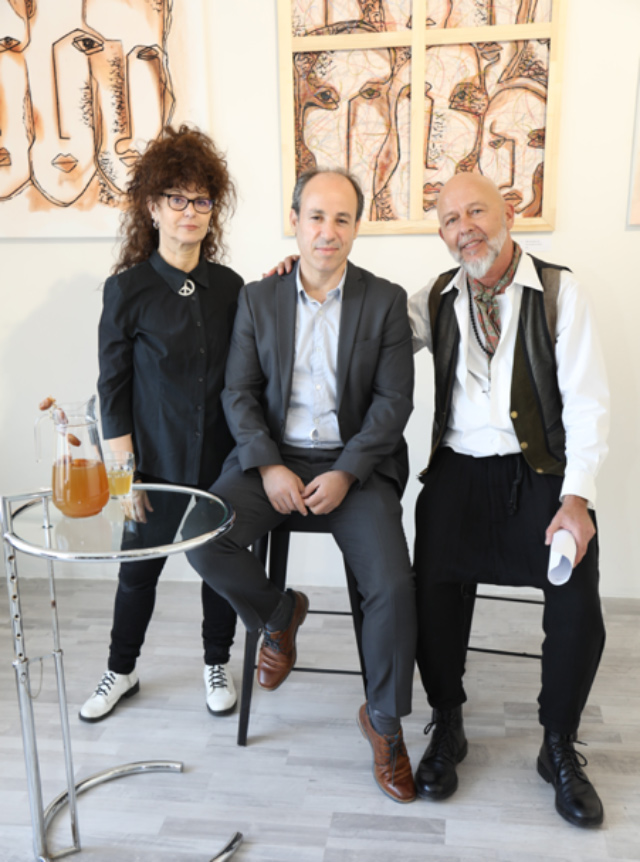