In the Lakota-Sioux language, the words "Waniyetu Wowapi" translate to "Winter Count." As a form of communication, Winter Counts mark notable occurrences amongst the Sioux people as a timeline of significant events. Grouped together, the images create a Winter Count catalogue that features the traditionally etched, painted, and/or drawn images on deer, elk, antelope or buffalo hides (later on muslin fabric) that serve as what some people may call a traditional history book. Winter Count is a way of preserving information for generations to come that is being revised and reclaimed.

Working within a community of people impacted by HIV/AIDS, artist Sheldon Raymore has created a Winter Count to preserve the story of HIV/AIDS for Native Americans on Turtle Island. The moments are part of a large buffalo hide that Raymore has shown on many occasions, including at the recent 2 Spirits & HIV Conference for World Pride 2019.

Below is a selection of notable occurrences within the story of HIV gathered by Raymore. For a look at the project and the full listing of notable occurences, please visit: prepahhontoz.com/winter-counts. 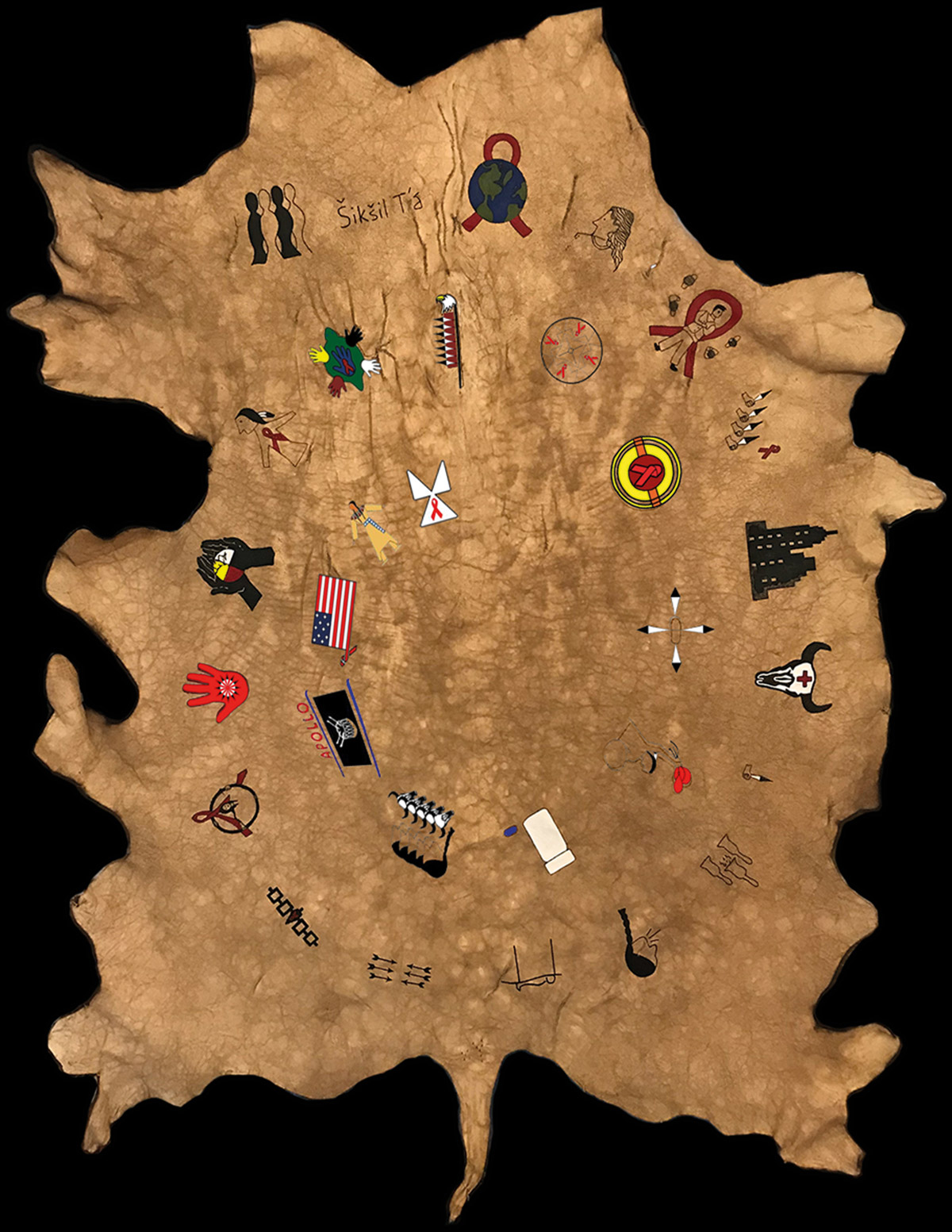 1978 - FIRST SYMPTOMS AND THE SPIRIT MEDICINE COME BACK WINTER

– People begin showing signs of what will later be called HIV/AIDS.

– Willie Bettelyoun, from South Dakota is diagnosed as HIV positive. He was harassed and discriminated against in his workplace, the tribal offices of the Rosebud Sioux Tribe.

– Published report on AIDS urges sex education as a means of HIV Prevention.

– WeWah and BarCheeAmpe are founded in NYC, bringing together Native queer people to challenge settler colonialism and defend Native peoples within pan-tribal alliances. The group drew non-Native queers of color into antiracist queer alliances committed to Native decolonization. Their work showed that queer politics of race, culture, or citizenship will fail to explain their condition unless they theorize settler colonialism, as Native activists did by challenging liberal multiculturalism as a method for naturalizing settlement. WeWah and BarCheeAmpe are also active in AIDS activism in the United States and Canada.

- FDA authorized pre-approval of Retrovir for the treatment of pediatric HIV disease.

- After 2 years of intense ACT UP over the price of AZT - Burroughs Wellcome lowers the price by 20%.

– Ryan White, teenager and AIDS activist, dies at 19. A True Hero whose legacy lives on.

– “It was a lot easier to prepare for death, now I have to think about living,” said a person living with HIV.

– American Indian House (AICH) hires a new community educator who presented the first ever PrEP and Pep presentation at the AICH.

– HIV was passed to the Mississippi baby from her mother during pregnancy. The child was treated with intense antiretroviral therapy within 30 hours of birth. After missing regular treatments, which would normally result in high levels of the HIV virus being detected in the body, tests show that the virus remains undetectable in the girl. This raises hopes of a functional cure for HIV. However, in 2014, HIV is once again detected—sadly, the girl’s remission has ended.

– A new approach to HIV/AIDS Prevention is created by PrEPahHontoz, a Lakota Two-Spirit through her multimedia art. She will use performance art by combining Native American sign language, projections, and vogue dancing as a way of educating the public about pre-exposure prophylaxis. Blue wooden PrEP pills adorn her dress as she belts it with bottles of Truvada.

– HIV organizations around the world endorse the “Undetectable = Untransmittable” slogan launched by the Prevention Access Campaign.

Sheldon Raymore is a member of the Cheyenne River Sioux Tribe and lives in New York City.  Since 2014, his mission has been to increase HIV/AIDS awareness, sexual health education, and accessibility of PrEP services for the Two-Spirit community and beyond. He is the creator of www.PrEPahHontoz.com which provides an enriching awareness experience, with culturally competent and appropriate methods of increasing PrEP awareness. The PrEPahHontoz Tipi project decreases social and cultural stigma's associated with HIV/AIDS, and HIV Prevention. It also disseminates accurate information about HIV and its history in the Native American community, while utilizing "culture as prevention." He's currently the Deputy Director and HIV Project Director for the American Indian Community House. He also serves on a Native American "Ending the Epidemic" Advisory Group with the AIDS Institute of New York State and serves on NMAC's Native Constituent Advisory Panel (CAP).