For an endurance performance video entitled Legacy, artist Carlos Motta worked with issue editor Theodore (ted) Kerr to create a timeline that he then performed along with journalist Ari Shapiro, with support from Tyler Haft. The text from the video was also created into a broadside that includes a drawing by Motta and Luca Cruz Salvati. The video and the broadside are presented in United by AIDS — An Exhibition About Loss, Remembrance, Activism and Art in Response to HIV/AIDS at the Migros Museum für Gegenwartskunst, curated by Raphael Gygax. Below is the image and the timeline text. 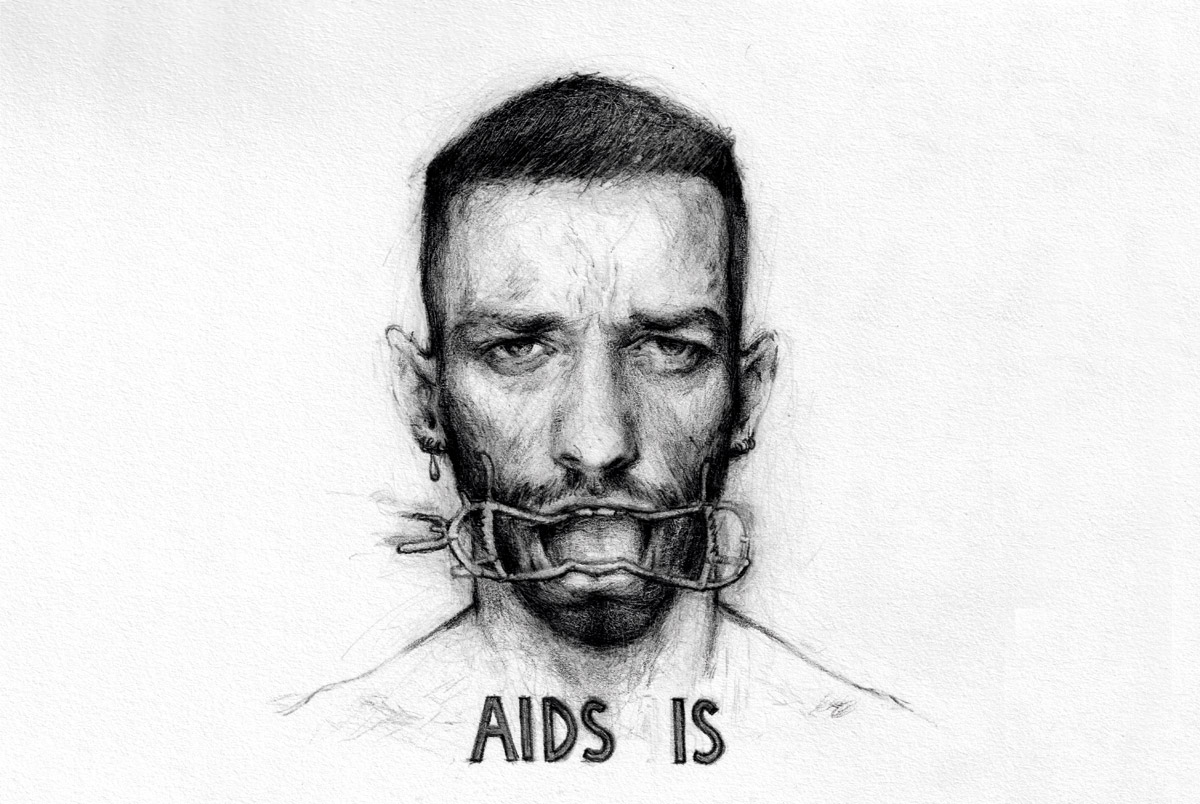 Carlos Motta and Luca Cruz Salvati, AIDS IS, 2019, Courtesy of the Artists.

Legacy: A Timeline of HIV/AIDS

1908
Scientists suggest that yet unnamed Human Immunodeficiency Virus (HIV) was first transmitted, from one chimpanzee to one human, as early as 1908 in the southeastern corner of Cameroon.

1960s
An HIV viral variant known as HIV-2 is found in West Africa and alleged to have transferred to humans from sooty mangabey monkeys in Guinea-Bissau.

1966
Genetic studies of the HIV virus indicate that it first arrived in the Americas in 1966, infecting a person in Haiti.

1969
Robert R., a teenager from St. Louis, Missouri, dies of an illness that baffles his doctors. 18 years later, molecular biologists at Tulane University would test samples of his remains and find evidence of HIV.


1970
Bayesian phylogenetic analyses estimate the jump of the HIV virus to the U.S. at around 1970, suggesting a crucial hub of early U.S. HIV/AIDS diversification.

1975
The first reports of wasting and other symptoms, later associated with HIV/AIDS, are reported in Africa.


1976
Arvid Noe, a Norwegian sailor, and daughter Bente Viviann Røed, die. It is later determined that Noe contracted HIV/AIDS in Africa during the early 1960s, transmitted the virus to his wife Solveig Oline Røed, who shared it with her daughter in utero.


1977
A San Francisco sex worker gives birth to the first of 3 children who would later be diagnosed with HIV/AIDS. The mother would die of AIDS-related complications in 1987.

1978
Senhor José, a Portuguese man, dies. He would be later confirmed as the first known case of HIV-2 infection and believed to have been exposed to the virus in Guinea-Bissau in 1966.

1980
Ken Horne, a San Francisco resident, the first recognized case of HIV/AIDS in the U.S., is reported to The Centers for Disease Control (CDC) with Kaposi sarcoma.

1981
The New York Times publishes its first article about HIV/AIDS.

Morbidity and Mortality Weekly Report (MMWR), the weekly epidemiological digest published by the CDC, reports of five cases of Pneumocystis carinii pneumonia (PCP) among previously healthy young men in Los Angeles. All of the men were described as "homosexuals."

1982
The term Gay-Related Immune Deficiency (GRID) is mentioned by the media and health care professionals, suggesting an inherent link between homosexuality and HIV/AIDS.

The term Acquired Immunodeficiency Syndrome (AIDS) is proposed at a meeting of gay community leaders, federal bureaucrats, and the CDC to replace GRID, as evidence showed the illness was not specific to homosexual populations.


1983
French virologist Dr. Barré-Sinoussi isolates a retrovirus that kills T cells from the lymphatic system of an HIV-positive homosexual patient.


1984
Gaëtan Dugas, a Canadian flight attendant who was unjustly linked by the CDC with several of the first reported cases of HIV/AIDS in the U.S., dies. His name has been exonerated since.

The U.S. Department of Health and Human Services (HSS) announces that scientist Dr. Robert Gallo has discovered the probable cause of AIDS: the retrovirus Human Immunodeficiency Virus (HIV).

The first HIV antibody test is approved in the U.S. HIV testing of blood products begins.

91% of all U.S. health insurance companies deny coverage to people living with HIV/AIDS.


1986
HIV is formally adopted as the name of the retrovirus that causes AIDS.

The New York Times reports that "one million Americans have already been infected with the virus and this number will jump to at least 2 or 3 million within 5 to 10 years."

The AIDS Coalition to Unleash Power (ACT UP) is founded in New York City, a day after a stirring speech by activist and Gay Men’s Health Crisis (GMHC) founder Larry Kramer.

The “Silence = Death” project begins to appear on the streets of New York City.


1988
December 1st is declared as World AIDS Day by The World Health Organization (WHO).

The U.S. FDA accelerates the drug approval process in response to demands by HIV/AIDS activists.


1989
New York arts organization Visual AIDS initiates the first Day With (out) Art, an event where educators and arts administrators work in partnerships to program art projects that raise awareness of HIV/AIDS and demonstrate support for people living with the disease and their caregivers.


1991
The red ribbon becomes an international symbol of HIV/AIDS awareness.


1992
The first combination drug therapies for HIV/AIDS are introduced. These "cocktails" prove to be more effective than AZT and slow down the development of drug resistance to the virus.


1993
The CDC expands the definition of AIDS in response to criticism that the existing definition under-counts women and other populations living with the virus.

Invirase, the first HIV protease inhibitor is approved in the U.S.

AIDS activist and patient Jeff Getty becomes the first person to receive a bone-marrow transplant from a baboon, as an experimental procedure to treat HIV infection.

HIV/AIDS becomes the leading cause of death for Americans between 25 and 44 years old.


1996
The Joint United Nations Programme on HIV/AIDS (UNAIDS) is established to coordinate a global response to the pandemic.

The first home HIV test is approved by the U.S. FDA.


1997
French President Jacques Chirac invites other countries to create a fund that would help increase the number of HIV/AIDS studies and experiments.


1998
The Treatment Action Campaign (TAC) is founded by Zackie Achmat to campaign for greater access to HIV/AIDS treatments in South Africa.

Gugu Dlamini is stoned to death in Durban after bravely revealing her HIV-positive status on the radio, inspiring protests in South Africa and around the world.

Zackie Achmat announces the world’s first drug strike stating, “I will not take extensive treatment until all ordinary South Africans can get in on the public health system.”


2000
The WHO estimates that 15 to 20% of new HIV infections are the result of blood transfusions.

The U.S. pledges $200 million dollars for HIV/AIDS relief in Africa.


2001
The U.S. FDA licenses the first nucleic acid test (NAT) systems intended for the screening of blood and plasma donations.


2002
Data shows that the HIV/AIDS epidemic’s shift into poorer and marginalized sections of society continues.


2004
The United Nations (UN) Secretary General Kofi Annan compares the “War on Terror” with the “War on AIDS.”


2005
The CDC recommends anti-retroviral Post-exposure prophylaxis (PEP) for people exposed to HIV through rape, accidents, or occasional unsafe sex or drug use.


2007
“The Berlin Patient,” Timothy Ray Brown who was co-infected with myeloid leukemia and HIV, undergoes stem cell transplantation and is cured from HIV.

The WHO and UNAIDS recommend male circumcision to be considered as part of a comprehensive HIV prevention strategy.

2008
The Swiss National AIDS Commission issues a statement for doctors in Switzerland about the safety of HIV treatment to reduce transmission, stating that an HIV-positive person on effective HIV treatment (ART) cannot transmit HIV through sexual contact.

For the first time in Latin America, The 7th International AIDS Conference is held in Mexico City.


2011
U.S. Congress reinstates a decades-long ban on federal funding for needle exchanges only two years after eliminating the same ban.


2012
The Oslo Declaration on HIV Criminalization, a ten-point declaration calling for the end of criminal prosecutions for HIV non-disclosure, exposure, and unintentional transmission is drafted by activists and academics in Oslo.

2013
UNAIDS reports that since 2005 deaths related to HIV/AIDS have declined by almost 30%.

2014
A child thought to have cleared HIV with treatment, tests positive for HIV, a disappointing setback in the quest for a cure.


2017
The U.N. and partners announce pricing agreement to accelerate the availability of an affordable, generic, single-pill HIV treatment regimen in low and middle income countries.


2019
President Donald Trump announces his Administration’s goal to end the HIV/AIDS epidemic in the United States within 10 years.

In a medical breakthrough, the kidney of Nina Martinez, a 35-year-old HIV-positive woman is transplanted into another patient with the HIV virus.

Co-produced by Migros Museum für Gegenwartskunst for United by AIDS — An Exhibition About Loss, Remembrance, Activism and Art in Response to HIV/AIDS, curated by Raphael Gygax. 1st edition: 2500.  August 2019.