What is needed in the current situation is a widening of the field of the artistic intervention, with artists working in a multiplicity of social spaces outside traditional institutions in order to oppose the program of the total social mobilization of capitalism. Chantal Mouffe[1]

Kacey Wong was born in Hong Kong in 1970. His experimental art practice investigates the space between man and their living environment with a social intention. He was inspired to address political matters after the Mainland Chinese artist Ai Weiwei was arrested in 2011. This was when he realised that what happened to Ai Weiwei could happen to others in Hong Kong as well. Employing humour and sarcasm, his aim is to create platforms where social and political art can be seen by the masses.

His many stories and projects are based on curating resistance, through socially interventionist and activist agendas, in order to promote awareness of Hong Kong’s political unrest. In 2013, for example, he began a mock design competition for the logo of Umbrella Movement (the city’s democracy movement), which went viral. He is aware how social media changed the way one participates in social movements and that the real prizes in this contest could ultimately be justice, democracy, and freedom.

Usually, Wong’s work is outside mainstream art spaces. The Real Cultural Bureau is a project that consists of a handmade pink cardboard tank that the artist brought to the streets of Hong Kong for a parade during the 1 July protests—a public holiday to “celebrate” the transfer of Hong Kong from the United Kingdom to Communist China. From the tank, he threw fake money. In that sense, Wong uses the protests as the new gallery, reminding us that art can exist outside museums as well.

Continuing outside the white cube, Wong carried out a workshop with children that aimed to expand their observation, memory, and imagination skills. The streets of the city are full of exciting little things if you observe carefully, and he wants us to observe more carefully. The city is not formed only by big architectural buildings but also very interesting design objects, i.e. vending machines, mailboxes, garbage bins, etc. For the workshop, children were able to learn and create a cardboard paper costume that they could wear proudly. The result is a wearable sculpture that relates to the surrounding space.

It is very hard to try to delineate his role, which would be something between an artist, a curator, and also a teacher. Nonetheless, he emphasises that curatorship is about collaboration, organisation, strategy, empowerment, and dialogue. It is about illuminating the invisible. For that, it is very important to speak the language of the people you are talking with. Art is not about solving problems. It is really about illuminating the problem; it is about helping others to see the real issue. He says: “My role as an artist is not to solve the problem but to bring forward the problem, to address the blind spot of contemporary art, to generate emotions through art, so others can be touched and take action.”

At the end of the talk at Connecting Space Hong Kong, in March 2017, he was asked where and how he finds the strength to continue. He answered: “Just being aware of what is going on around you.” Kacey Wong generously agreed to an interview by email in order to find out more about his thoughts on the notion of public space, be that streets or social media, and the different strategies of gathering people and to be creative in public spaces.

Giovanna Bragaglia: In 2013, you started an online mock design competition for the logo of Umbrella Movement in order to generate more awareness for a cause, namely the city’s democracy movement. Could you please say something about your concerns about the use of social media as a platform where everyone can participate?

Kacey Wong: I think getting people to participate in social and political actions can happen on many levels. The brave can choose to get involved at the front line, shouting and pushing, but what is more important is to provide a ‘safe’ platform (or seemingly safe) for everyone to contribute, and I think social media is that kind of platform. The mock design competition for the Umbrella Revolution Logo came from this idea; participants sent in their logo designs from their computer or handheld device under the security of their own home, sometimes even from cities outside of Hong Kong, and they didn’t have to be physically present. It is important to create this initial first step that is easy and safe in order to generate the participation necessary, then the subsequent steps of coming out to the real protest site will seem easier.

GB: Public art helps us not to forget the democratic and political character of it, being capable of proposing to each individual new relations with the world, with people, and with him or herself. Would you agree that all art is public, or at least that it should be?

KW: I think there is a difference between public art and art in public space. Many of the public art we currently experience in public space comes from top-down processes. This is due to safety, political correctness, or bureaucratic relations between various government parties. The resulting works are often compromised and dumbed down. Compared to indoor gallery and museum spaces, putting artwork in public space is much more challenging, since there are site histories and spatial issues to deal with. In a society that is heading towards more and more self-censorship, public art that exists off the grid—like graffiti artists do—can be seen as a form of resistance to authority.

GB: In your practice, you make use of protests as a context for art, as with The Real Cultural Bureau parade during the protests for July 1 in Hong Kong in 2012, for example. How and why did you start to think art outside museums and traditional art spaces, and how has this changed your work?

KW: Artists always complain about not having large enough audiences, exhibition spaces, or enough funding. Protest space provides all three and more: the crowds are already there, the streets are wide, and the sky is the limit. Most importantly, the cause is there. I started creating art in protest space as an attempt to bring forward issues rather than using art to solve a social problem. Also, to push the envelope of where art can exist. It empowers protestors and is also an emotional release for me. Personally, I have to do it since I care so much about Hong Kong; it is about survival, and art creation is my tool.

GB: Do you think practices that are extraneous and critical of the art system can end up being inserted into it again? Additionally, do you see this as a dynamic relationship between artistic practice and its placement? Are there negative aspects of bringing this work back inside an institution?

KW: I think the economy of art can infiltrate anything. For example, the Land Art movement in the ‘60s tried to escape the capitalist system by going out to the countryside to make art, creating works like Spiral Jetty, etc. but the art market can sell the photographs of the site installation, so really there’s no escape. The art system has many tools, and it can dissolve or increase the power of the artwork. One example is graffiti that is decontextualized and moved into shows inside gallery or museum spaces; its original power is suddenly weakened since it is off site. Of course, one can argue that institutions will make the work more famous, but it is a double-edged sword scenario depending on the artist’s intention.

GB: In the workshops “Body & Architecture Urban Ninja,” where you work with children, you have created a way of teaching community identity through a procedure of collective creation and production. How do you think up different strategies for gathering people and forming an audience?

KW: I keep in mind that running workshops that involve the public should be fun, hopefully generating not only interesting physical artworks but also lasting memories. In other words, the art process is what I am interested in, and I think more and more public art is heading in that direction, rather than dropping large-scale sculptures into public space that have nothing to do with the people there. Also, art intervention is another key to be considered—if a work suddenly appears, it sometimes can create the maximum art effect, since the reaction from passers-by will be honest and in your face. The difference between gallery and museum-goers and a passer-by in the street is that the passer-by is actually an accidental viewer, whereas gallery-goers are already looking for art. This makes creating art and gathering people and audiences in the public space much more challenging.

GB: To you, where does the radicality of art reside today?

KW: Protest Art, Activist Art, and Resistance Art will continue to be the forefront of radical art. The world is more and more dominated by dictators like Trump, Putin, and Xi Jinping, and the spirit of the times is resistance. Perhaps the ingredients for art that are needed most in today’s twisted world are courage and hope, putting the radicality of art to good use for the benefit of our society. 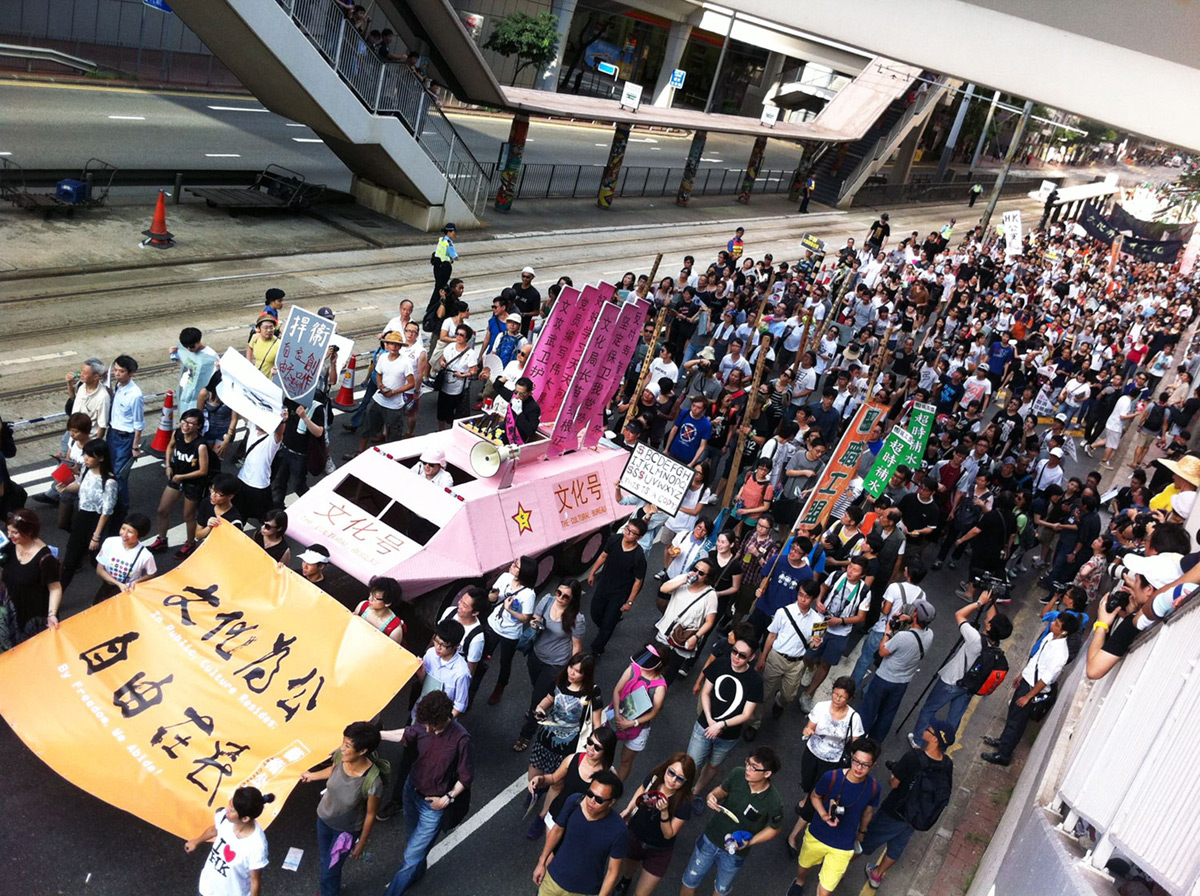 Dr. Kacey Wong (b. 1970, Hong Kong) studied architecture at Cornell University and received his Master of Fine Arts degree from the Chelsea School of Art and Design and his Doctorate of Fine Arts degree from the Royal Melbourne Institute of Technology. He is the founding member of Art Citizens, Street Design Union, Umbrella Movement Art Preservation, and former curator and member of Para/Site Art Space. Also a former Assistant Professor at The Hong Kong Polytechnic University, School of Design’s Environment and Interior Design Discipline, he is currently an Examiner of the Hong Kong Arts Development Council. He was the winner of the Best Artist Award in 2010, Rising Artist Award and Outstanding Arts Education Award given by the Hong Kong Arts Development Council in 2003.

Giovanna Bragaglia (b. 1986, São Paulo, Brazil) is an independent curator based in Zurich. She has worked in contemporary art institutions in Brazil, such as Paço das Artes, São Paulo, and Instituto Moreira Salles, São Paulo, Rio de Janeiro, and Poços de Caldas. In 2018, she graduated from the MAS in Curating at Zurich University of the Arts. She has curated a range of versatile exhibitions spanning an interesting gamut of topics. She curated Silvan Kälin: Homo Viator, at OnCurating Project Space, in Zurich (2018), the itinerant exhibition Alice Brill: Impressões ao rés do chão, Instituto Moreira Salles (2015-2019), and co-curated the exhibitions De-colonizing Art institutions, and Say The Same Thing, at the OnCurating Project Space, in Zurich (2017), and Processos Públicos, Paço das Artes, in São Paulo (2010).