In Zurich, studying at ZHdK in the MAS Curating Programme, one of my aims is to be able to look at cultural institutions from a distance and have the time to reflect on its structures. Taking part in the De-Colonizing Art Institutions Summer Academy & Symposium helped me to understand and exchange ideas about museums and art institutions that all over the world tend to have a uniform appearance, following "Western" examples. Today, it is more important than ever to understand and reflect on how art institutions and museums could work differently, and what and how would be the new formats.

With this in mind, in May 2017, a group of curators[1] asked artists and researchers worldwide to contribute with proposals, images and concepts regarding De-Colonizing Art Institutions. The material is available online[2] and can be freely accessed and download. Access to the material was also available within the On Curating Project Space, in an exhibition project, which was proposed to recreate and rethink the exhibition space and its visitor perspective. There, one could find a computer and a printer available to access and print out the contributions. Exploring and expanding the sense of curating, visitors could decide by themselves what to print out and hang on the space’s wall (with hammers, nails, and tape), or take the printed material with them. 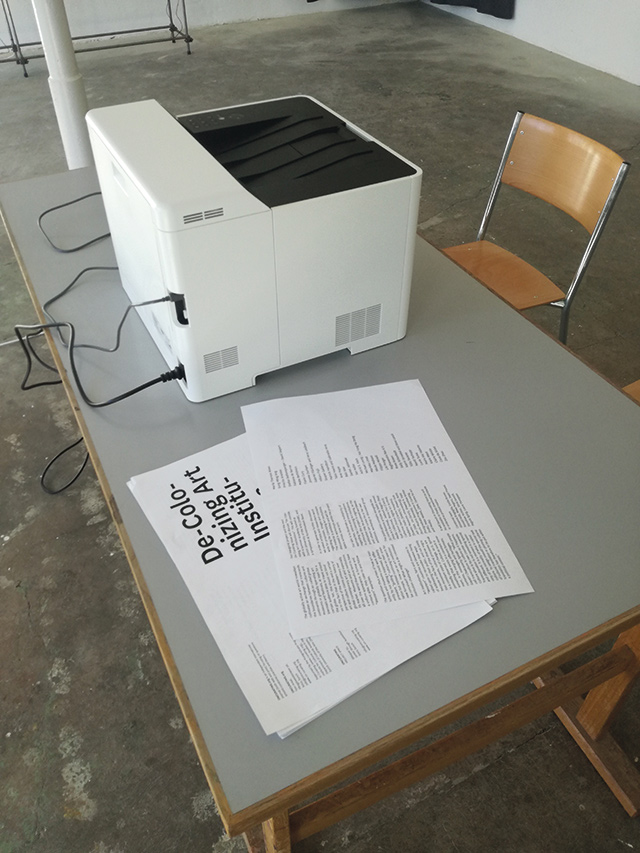 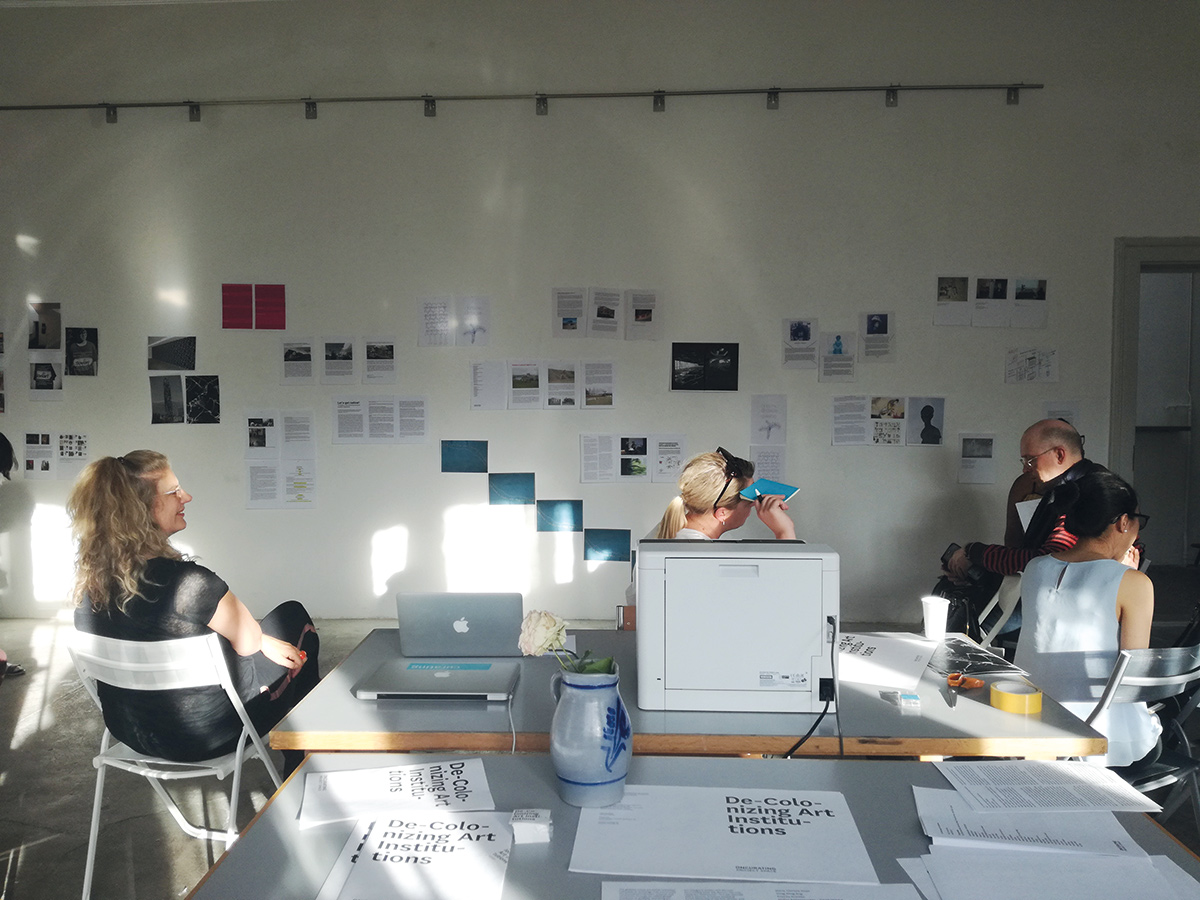 It is well known how intimidating the white cube can be. Curiously, in Rio de Janeiro, I was working in an institution that was once an inhabited house, the Instituto Moreira Salles, but I don’t know if one can say that being there feels like home. It is not only about the architecture.

However, building a familiar environment can take time. When far away from home, in an unknown environment, it is more than natural to try to find a certain comfort so you don’t feel like a stranger anymore, and you can feel safe to go wrong. By the way, who said what is wrong and what is not?

The Brazilian artist Maria Thereza Alves, one of the 34 artists invited to the project De-Colonizing Art Institutions, describes in her text an interesting passage about her mother approaching museums:

My mother had such fear of visiting museums that years later, when working as a maid in the Upper East Side of Manhattan, and living quite close to the Metropolitan Museum of Art, she never visited it until after I took her there. That day, she held back climbing up the stairs and even after we purchased discounted tickets and walked to the entrance door—which are quite tall and fascistic, she was dragging back and nervously whispered that the guard would not allow us to go inside. She thought he would shout at us to get out of the museum and as a naturally shy person feared being publically embarrassed. We made it in and after that she would often visit the museum but never one in Brazil.

In the book The Birth of the Museum, Tony Bennett narrates the emergence of museums, fairs, and exhibitions in nineteenth and twentieth century within a process that he calls the exhibitionary complex. Within it, visitors observe the show at the same time that they are observed. The author analyses how institutions have not only organized their collections, but also their visitors, teaching them how to behave and regulating their social routines.

Home sweet home
Museums have, or at least should have, very different aims; however, how can they continue using the same structure as before? There is a need to rethink its nature as a social space, as a space of representation, observation, display, and regulation. How to build a place that people are not afraid of? How to engage people to be part of it? In order to make contemporary art more open to the world, perhaps the solution is to try to transform it into a home, where visitors and artists are not received as numbers or even guests, but in a place that they can feel at home.

The contemporary art space located in São Paulo, Casa da Xiclet, which was also invited to collaborate in the De-Colonizing project, briefly describes themselves in the received contribution as follows:

(…) the mixture of someone’s house and art gallery, the latter being a kind of anti-gallery (since it is democratic, nonrestrictive and having a contaminated “whitecubeness”) and the former, a kind of non-house (since the private ends up turning into public…). A blend, thus, of house and gallery.

And not by chance, they cite the concept of mess by Robert Filliou, who says that a real democracy is not possible if we do not welcome lack of discipline. Improvisation is needed in order to allow for creation.

And what is the concept of home if not a place where you feel comfortable, where mess is allowed, where you feel you can stay and that you are more than welcome? A place that is part of your life since it may contain stories with which you can identify and thus somewhere you may wish to go more often.

Take Your Time And Feel Free
The concept of home also carries the idea of a place where you can fail, such as The Centre for Less Good Idea. Founded by the artist William Kentridge, it is an interdisciplinary incubator space for the arts based in Maboneng, Johannesburg. The place’s aim is “to find the less good idea by creating and supporting experimental, collaborative and cross-disciplinary arts projects,” as described on the website:

The Centre is a space to follow impulses, connections and revelations. It’s a physical space for artists to come together over two seasons every year and for curators to bring together combinations of text, performance, image and dance. The Centre believes an ensemble sees the world differently to how one individual does.[3]

The place functions as a home for artists. “It is a safe space for failure, for projects to be tried and discarded because they do not work. It’s a space for short form work, which doesn’t have a natural home in a theatre or gallery.”[4] As pointed out by Jeebesh Bagchi in his talk at ZHdK, art is not an object; it is about the production of a space. It is perhaps something that you inhabit rather than see. However, it is not a laboratory, as one might think, since no one is looking for results.

Still reflecting on the production and role of this space called museum, the Brazilian artist Daniel Jablonski, another of the invited artists of the project, presents “No museum exists, none has ever existed,” a montage over the introductory pages of the book Le Musée Imaginaire by the French writer André Malraux. Jablonski simply flipped the colors of the facsimile, showing its “reverse” side and replacing the original images—an image of an exhibition room at MoMA and a reproduction of a painting by David Teniers—with two photos of the fire that destroyed the Museum of Modern Art of Rio de Janeiro in 1978. It is interesting to point out, in this introduction, Malraux reminds us how museums seem so fundamental nowadays that we can no longer understand that they are a very recent Western invention.

Art is the world without absolute answers, boundless and timeless—it is not possible to delimit either the beginning or the end. Museums and art institutions should be a place where people should feel safe to navigate, since, “It is navigation out of any ship, sometimes with any safe or correct direction, with no wave, and with no sand,” as the Brazilian poet and politician Jorge de Lima[5] once wrote. We may never arrive, and even when we arrive, we will never have actually arrived anyway, because there will be always more and more paths to navigate. What is most important is not drowning and having the tools to be able to go forward, looking for the means to grow and overflow.

For about six years, Giovanna Bragaglia has worked in cultural institutions in Brazil focused on contemporary art. At Paço das Artes, an experimental, dynamic, and multidisciplinary institution, linked to the Cultural Secretary of São Paulo, she worked closely with young critics, curators, and artists as a researcher and as a producer, promoting national and international art through exhibitions, catalogues, and educational activities. After that, she worked as a curatorial assistant on international exhibitions at Instituto Moreira Salles in the Visual Arts and Photography Departments, including shows of Richard Serra, Tacita Dean, William Kentridge, and Luigi Ghirri. She curated the exhibitions Processos Públicos (2010), Paço das Artes, São Paulo; Alice Brill: impressões ao rés do chão (2015) IMS, São Paulo; De-Colonizing Art Institutions (2017), OnCurating Project Space, Zürich, and Say The Same Thing (2017), OnCurating Project Space, Zürich. She currently lives in Zurich and studies in the MAS Curating Programe in ZHdK.

2 All the contributions of project “De-Colonizing Art Institutions” described in the text can be accessed in the link  http://www.on-curating.org/oncurating-project-space.html

5 A reference taken from the 29th São Paulo Biennial, 2010, titled There is Always a Cup of Sea to Sail In–a line borrowed also from the poet Jorge de Lima in the work Invenção de Orfeu (The Invention of Orpheus), 1952.