While the doual’art association works on the third edition of SUD, the public art event which aims to transform the capital of Cameroon, an itinerant exhibition exports the event to Europe, passing through Rotterdam, Nantes, Ghent and Milan.

1. The Venice Biennale was founded in 1895 and with it a type of art exhibition that, by adopting the simple term biennale, immediately declared its intention to be imposing and enduring. Actually, it matters not if an event is annual, biennial, triennial, quadrennial, quinquennial or a one-off, the simple reference in the title to a cyclical nature makes people think it is a biennial.
The place-name in the title is another distinctive feature as, one way or another, it is a declaration of a wish to promote tourism. In 1993, Thomas McEvilly (Thomas McEvilley, “Arrivederci Venice: The Third World Biennials” in Artforum International, 01/11/1993) observed an epidemic of major exhibitions in what he calls the Third World. His text does not consider the 1966 Festival Mondial des Arts Nègres as a biennial despite its desire for four-year recurrence; nor does it analyse the numerous film events; it is based on a selection of partial sources and does not indicate continuity between events launched in the 1970s and those of the 1980s.

However, the article is extremely important because it stirred up a whole host of discussions on biennials and, most importantly, gave rise to a recurrent style of analysis, that examines exhibition catalogues on a basis of Western style versus non-Western style, Modernism versus Post-Modernism and centre versus periphery. I do not know how many of you have had the privilege of leafing through the catalogues of the biennale of Dakar, Cairo, or indeed the itinerant Bantu one, but we must admit the painstaking care with which Thomas McEvilly conducted his investigation is truly praiseworthy, analysing grainy pictures and turning the pages of often quite makeshift publications in pursuit of comparative data.

The fact remains that an exhibition catalogue is not the exhibition and you lose sight of much of the substance when observing an event from a distance. It does not fully convey the Egyptian government’s role in the organisation of the Cairo Biennale; you miss the buzz that accompanied the rapid birth and death of the Johannesburg Biennale; and you cannot drink toasts in the mild Senegalese spring along with the large number of artists, curators and critics who come from all over the world to the Biennale de Dakar.
Looking at a map of the world with every biennial marked with a dot, it is hard to make out the links and people, and it is difficult to realise that the Biennale de Dakar has had such an impact on the African art scene, much more than that of Venice.


2. Douala is where the SUD-Salon de Douala has been held every three years since 2007. I hope its citizens will forgive me but, quite frankly, Douala is one awful place. An inhospitable city, it is violent and ugly without having the notoriety of Lagos or Luanda’s oil. It is one of the greatest Central African ports, the financial capital of Cameroon and a place of passage where people always seem about to leave, such is the rush to get away. So harsh is this context that it is extreme and symbolic. Producing works of art in Douala’s public space involves a striking degree of complexity which includes — to give you an idea — the management of public and private land ownership, working with local authorities and police, the importing and expense of equipment, sourcing materials, training skilled staff, fundraising, security and the problematical issue of photographing public artworks in a place that really is not photogenic. This is an impossible environment to conjure up when strolling through the streets of Münster, to remain on message. The SUD triennial was created with the aim of bolstering the work started by doual’art in 1991 and to transform Douala. No local branding but real and pure transformation. And they are succeeding! In Douala!

Doual’art has produced artworks in the public space by working with the city administration, stimulating public debate, involving communities, launching a triennial and mobilising artists and experts the world over. If this had been started a few years ago, you would understand and admire their enthusiasm but it all commenced more than 20 years ago. Their dedication is the most striking factor
as just getting through the day in the heat and humidity of Douala makes you feel like a hero.


3. The critic and curator Gerardo Mosquera has explained it clearly in several essays: working in an area and making an impact in the medium-long term is what biennials find hard to do but what they ought to pursue, to trigger new processes and fully foster cultural production. Many events attempt this with activities in squares, schools and with open archives. The SUD case is very different. doual’art started planning its triennial in 2005, building on long experience already gained in Douala.

It was, indeed, in 2005 that Marilyn Douala Bell and Didier Schaub created the Ars&Urbis think tank to gather a group of people that would promote the event and guarantee the required international scope, visibility and continuity. The idea is that doual’art should continue to do what it does best: support artists and produce artworks in the public space. The efforts are not all spent during the event but converge on it; SUD is when what has been produced is presented to the world and the city is celebrated. The first triennial held in 2007 featured permanent and transient interventions; the second time around, in 2010, they refined the selection of the works; and ever larger interventions are planned for 2013. doual’art’s expertise is growing, SUD is growing and the desire to involve the city as a whole is growing. 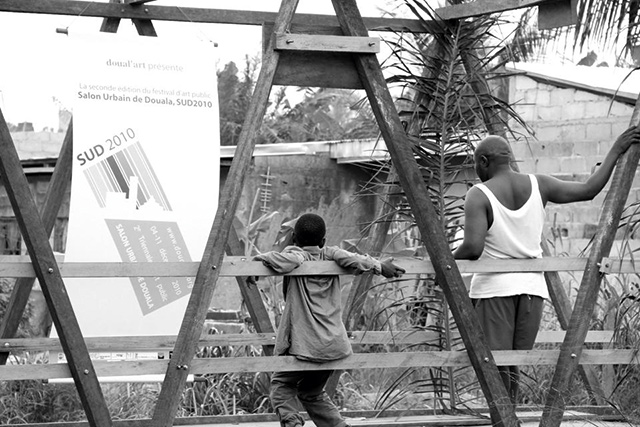 
Imagine a visitor map of Paris with the Eiffel Tower, Pantheon, Louvre, Champs-Élysées inserted as 3D city icons. Adopting a similar technique, doual’art is working on a 1:1 map of Douala. Research has reconstructed the history of 30 buildings dating from colonial times and 18 have been given signs by the designer Sandrine Dole. doual’art commissioned and produced La Nouvelle Liberté, by Joseph-Francis Sumégné, considered a monument to the city and observed by several scholars as a case study on its emblematic impact. It has produced 50 works (approximately half transient and half permanent) in a dozen districts. One of the most poetic installations is a screen on the Wouri River by Salifou Lindou, who used simple metal and plastic to create squares where the fishermen wash on their way back from work. The itinerant SUD-Salon Urbain de Douala exhibition provides an opportunity to meet Douala and experience a visionary and innovative event that is both instructive and surprising. The exhibition’s first stop is Rotterdam, for the Architecture Biennale, followed by Dakar for the Biennale de Dakar, Nantes, Ghent and Milan.

Iolanda Pensa (b. 1975) is a researcher and art critic. She holds a university degree in medieval art history from the Catholic University of Milan (Literature and Philosophy, Modern Literature, 2003), a Ph.D. in social anthropology and ethnology and in territorial government and planning at the EHESS (École des Hautes Études en Sciences Sociales) in Paris, in collaboration with Politecnico di Milano Department of Architecture and Urban Planning (2011). Her professional experience includes: researcher for “Africa e Mediterraneo” (2002-2006); founder and board member of iStrike Foundation in Rotterdam (2005-2008); professor of art economy at NABA Nuova Accademia di Belle Arti di Milano (2007-2011); correspondent for Africa for Domus magazine (2011-2012); scientific director at lettera27 Foundation in Milan (2007-2012) for the projects “WikiAfrica: Increasing the Quality and Quantity of African Content on Wikipedia” and “Share YourKnowledge: Creative Commons and Wikipedia for Cultural Institutions”. She has also been a researcher at the Laboratory of Visual Culture/Department for Environment Constructions and Design/SUPSI University of Applied Sciences and Arts of Southern Switzerland (2013-), artistic director of Associazione Amici del Museo delle Grigne Onlus (2007-), coordinator of Ecomuseo delle Grigne (2010-), and leader at Wikimania Esino Lario 2016. Her research interests include systems of knowledge production and distributions in Africa; assessment of cultural institutions, GLAMs, and public art; the impact of international grant-makers on culture in Africa; Wikipedia; and the Dakar Biennale of Contemporary African Art.

In this Context: Collaborations & Biennials

For Whom Are Biennials Organised?

Counting On Your Collective Silence

Marcus Neustetter of On Air on Collectivism and Curating

Justin Davy of the Burning Museum