An interview with Beta Local

Adriana: One of the main characteristics of Beta-Local is that the local reality of San Juan is both the starting point of the project and its main sphere of action. In this respect, who would you say is the specific community that engages with Beta Local?

Pablo: Beta-Local is anchored in aesthetic thought and artistic practices in Puerto Rico. So on a basic level, the people that engage more with our programs are visual artists. As an organization we work a lot in supporting art-making—very broadly defined—and we do this while responding to and rethinking our context.  We are also focused in creating links across disciplines, and finding connections between artistic practices and other ways of thinking and doing.  Beta-Local is organized around three main programs: La Práctica, a nine-month production-based program;  The Harbor, a residency program; and La Iván Illich, an open school through which anyone can propose a class that they want to take or teach. The user-generated elements of some of our programs, as well as our interest in education and exchange, open the space to a wide range of audiences not necessarily connected to the art world, starting with our immediate neighbors of Old San Juan (where we are based) and people interested in other structures of intellectual and/or knowledge production and exchange.

Adriana: It seems like the engagement of Beta-Local with the community points to an intersecting point between social work and artistic practice. How would you characterize this intersection and in which ways do you consider that the project has had an impact in the community?

Pablo: We insist on artistic practice and aesthetic thought as an essential social and political part of life.  This approach, and our focus on exchanges, promotes further collaborations between artists and other social agents, generating unexpected overlaps and setting the conditions for re-addressing our local context.

On the other hand, our idea of community is not a monolithic one; at Beta-Local we work and interact with lots of communities. Also, part of our work is in creating "community," as concept and as something real and concrete.  Our most important role is to support artists in making work, especially considering the lack of functionality and support from local institutions.  In a place where institutions (most of them) are weak and/or highly bureaucratic, we provide an open and flexible space for critical discussion and debate, which gathers a diverse group of individuals (artists and non-artists) interested in changing the current social and political conditions, not only within cultural production, but life in general.  We want to provide a space for contact and exchange between artists and other publics that otherwise would not interact, and this usually works as a catalyst for new or other situations and collaborations that have a positive impact in our social fabric, providing new conditions and other narratives to the existing ones.

Adriana: Do you consider that art practices that intervene the social sphere should be "useful"? And is there a way to measure or follow up on this?

Pablo:  There are many art practices with different "values" attached to them.  We think all art, good or bad, intervenes in multiple ways with the social field.  Like we mentioned before, we insist on artistic practice and aesthetic thought as an essential social and political part of life.  We particularly work with and support artists that have a kinship with the most interesting ideas and forms developing locally or that challenge in a positive way our ways of working.  We are creating a critical context for this work—we want it to be discussed, to be challenged, and to push it further.  This happens by putting artists together, creating connections between their work and others, and supporting the development of new work and ideas.  When this happens, you can follow up on the impact it has on the continuity or the permutations of some projects or work, and on the growing connections (with other artists, curators, intellectuals, with different communities) that generate other exchanges, situations, and discussions for the artists and the community in general.

Adriana: So far we have addressed the "Beta" aspect of the project: the experimental methods and ways of working that you are exploring. What about the geographical aspect? It is very clear that the "local" space is San Juan, but where is the balance between the local and the global?

Pablo: We think that what is happening here is important to the larger international art conversation, precisely because many of the art world givens are not operational here.  The Harbor, our residency program, was created to bring international artists, curators, and thinkers (including Puerto Ricans based abroad) to Puerto Rico every month.  This way, we expand our idea of exchange, putting the local into contact with the global.  We have many close international collaborators.

Adriana: And what is the role of the curator in Beta-Local?

Pablo: Like with anything else at Beta-Local, roles are super flexible and very broadly defined.  Among many things, the curator, as well as the artist, is thought as a facilitator.  For us, it is super important that working and exchange relations are among equals, that all agents are on a same level.  The inner operational structure and the approach within our programs is a horizontal one.

Adriana: When it comes to the origin of the project, from where did it emerge? Did you recognize a need for it in the community? And would you say there are any specific challenges that arise from working with a bilingual community?

Pablo: Beta-Local grew out of our interest in rethinking aesthetic thought and artistic practice from our local context.  The organization is thought of as space for direct critical discussions and a place to foster a strong and healthy artistic community.  It also emerged from an effort to formalize and make possible a space for direct dialogue on a daily basis, and to make public meetings that were happening in private at artists’ and curators’ homes.

In regards to the bilingual situation, we don't see this as a challenge, but as an opportunity.  Our geographical and political context gives us the opportunity to work as a bridge, channeling discourse and content in many directions.  But it is important to point out that we mainly think in Spanish.

Adriana: And among the three projects that Beta-Local runs in parallel, which one would you consider has been the most successful?

Pablo: We are proud to contribute as a platform for artists and thinkers who stay in Puerto Rico (and also move back), considering that many people are leaving the Island.  It is also great to see how new collaborations have emerged from our programs and to see how participants from La Práctica (past and present) continue to develop interesting projects and continue to use other Beta-Local platforms.  There are some aspects of the programs we want to grow: we want to be able to work on longer-term projects with resident artists, whether that is through developing new work, research, or programming.

Adriana: In the practical aspect, how does the internal structure work and how do you finance Beta-Local?

Pablo: Our funding comes from multiple sources. It ranges from monthly community dinners, where we ask for a $10 donation (we use that to cover some airplane tickets), to twice-a-year fundraising parties, to contributions and grants from local and international foundations and individual contributors.

Beta-Local is run by three co-directors who collectively partake in the operation of the organization.  After almost five years, those positions are starting to rotate, bringing new perspectives into its structure, day-to-day operation and future goals.  The idea is that a past participant of any of Beta-Local program could be a potential co-director in the future.

It is important to point out that every member of La Práctica, The Harbor, and long-term participants of La Iván Illich have a key to the space and can use it as an office, work, and meeting place, or just as a place to have a coffee.  Having this constant flow of people contributes to a collective discussion and the development of ideas, having a great impact in the projects itself. 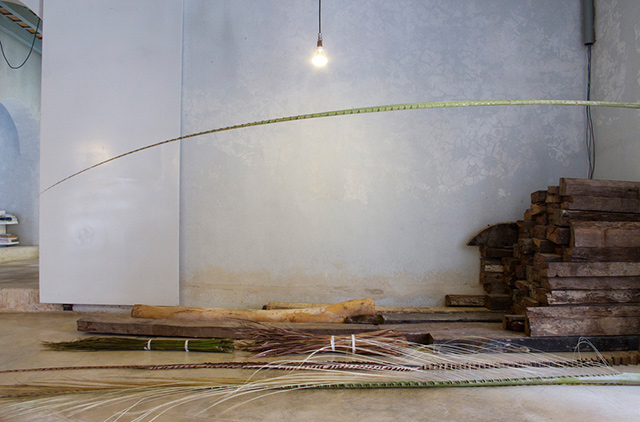 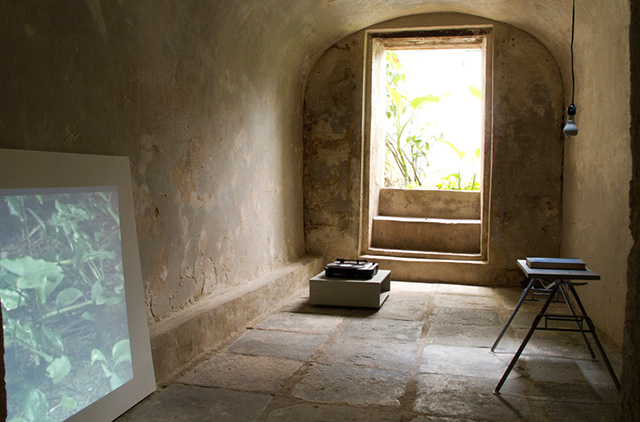 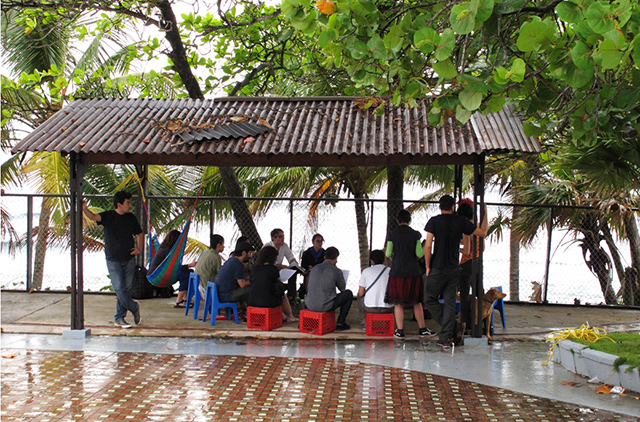 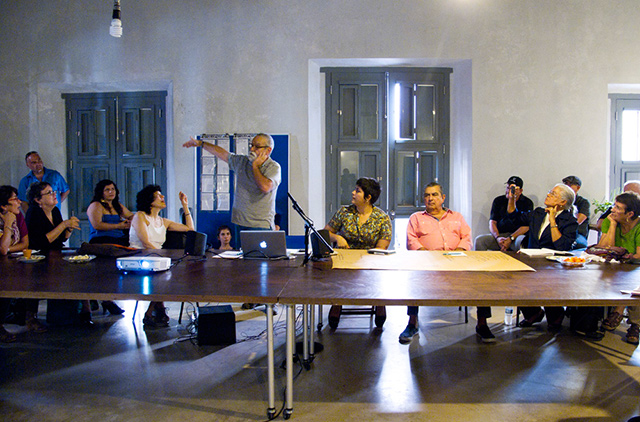 Beta-Local is a non-profit organization, a working group, and a physical space based in San Juan, Puerto Rico. The project, founded in 2009, is a study and production program, an experimental education project and a platform for critical discussion, which is immersed in the local reality of San Juan and the characteristics of its present moment.

Through three different projects which are run in parallel—La Práctica, The Harbor and La Ivan Illich—Beta-Local supports and promotes aesthetic thought and practice, without the intention of becoming an institution in the globalized art market or academic spectrum.

Pablo Guardiola is one of the three current co-directors of Beta-Local. For more information about the project, visit: http://www.betalocal.org

Socially engaged art in the 1990s and beyond

Between Utopia and Reality. The Martin Schick Learning Centre / NOT MY LAB

A conversation with Eyal Danon

An interview with Beta Local

An interview with Swiss artist San Keller, 12 May 2014, Zürich, Switzerland

Questions on community with Ursula Biemann