Silvia Simoncelli: For Abstract Possible you welcomed the invitation of Maria Lind to contribute the black painted plywood floor that, since your 2007 show, at Petzel gallery, New York, has often been included in your solo exhibitions. How did you decide to include in this show a replica of the floor you had in your studio back then? Is there a shift in the meaning of this element for you, now that it has become an independent piece defining the space for other artist's works?

Wade Guyton: When planning my first show of a series of so-called black paintings, it was important for me to consider the installation, the space, and the mode in which they were produced. I was not in fact a painter, and I didn't want to pretend otherwise. These objects were made with a computer and my printer. They are dragged across the floor and often are piled up on the floor for weeks or months before being attached to stretchers. So the floor was always an integral part of their making—the scratches on the surface of the works, the dirt the ink would soak up from the floor—all of this. So it made sense for me to bring this floor into the gallery—to give the paintings a context and to connect all of them to each other. It was also the only painted surface in the room, so you would feel the painting through your feet. For all three of the black painting shows—in New York, Paris, and Frankfurt—the floor was installed. Maria asked if that work could be shown separately from the paintings and I agreed. 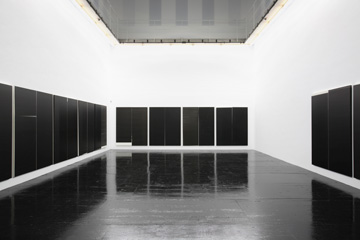 In each of my three black painting shows, the floor would adjust its shape to the confines of the room. So in New York it was shaped like a large square with a smaller square attached and an appendage the shape of a long hallway. In Paris, the shape had many more sides and in Frankfurt, it was one large rectangle. So it had the effect of being a liquid that would adapt to the shape of its container. In Malmö, it was rather imperceptible—the room was smallish and one might have paid attention to the other works in the room more. In Mexico, I think the room is much more unusually shaped and rather large, so it might have a more dramatic effect. It's interesting for me to have this piece keep spreading, maybe now being more sculptural or architectural than conceptual or theatrical, because it's now unrelated to my studio works.

Maybe it becomes more and more like a painting, independent, self-referential, but it's hard to tell.

I have always been interested in letting my works go into foreign contexts or curated ideas that I might not immediately have an affinity to—what I mean is its good to let people use the works as tools, disrespect them a bit even and let the works go out into the world to do different jobs. Its like human socialization. Sometimes we need to be in situations or mix with people that we might not like or share beliefs with.

SS:Your earlier works included flat abstract sculptures made of black painted plywood structures, which were 3D renderings of forms you obtained by colouring black images of houses taken from architectural magazines. According to your description of the black painted floor as a liquid adapting to other pre-existing shapes and the reference you made to sculpture, do you see a relation between your floor piece and these earlier negative spaces?

WG:The works you describe from 2001-2003 were actually only one series of sculptures made from a series of drawings about one sculpture in the landscape. It was a photograph I took of a specific house then blacked out with marker and then taken apart visually and physically built into fragments and shown as objects that would point to a larger unfinished and unrealized sculpture—one the shape and size of a real house. A shadow of the house in a sense, but made out of plywood, painted black—there was also a mirrored version of this sculpture. This was early work by me—trying to bridge the physical, the architectural, and the photographic. Elements of this impulse then remain in later works—I gave up the hand-drawing parts, but the architectural fragments still echo in later works.
The floor piece in Zurich is certainly related materially…

SS:Your practise is constantly challenging what can be defined as the “accepted categories” in art. You call your printed works on paper “drawings,” and your printed works on canvas “paintings,” giving to the support element the potential to define the status of the artwork itself. Besides practical reasons for preferring a technique among others to produce your works, do you have a specific interest in pushing the limits of these definitions further?

WG:What initially drew me towards art was the fact that it was engaged with language and that this language and these structures seem to always be in a state of fortification and dismantling. Growing up I was never good at art classes, and when I was younger I was often bored with the purely visual or the impulse to render images through drawing or painting. 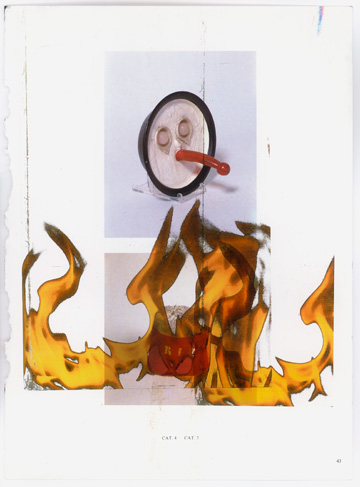 While my interest hasn't been intentionally about challenging the contours of these categories—drawing, painting, sculpture—nevertheless the work has seemed to push a few boundaries, but only in a minor way. It seems that the history of modern or contemporary art as we know it is itself a history of art defining its contours. So if my work makes any contribution to that its merely an introduction of certain technology and simply maintaining a tradition of material or contextual self-awareness.

SS: I read in an interview that you once said “it is necessary to narrow things down to expand.” This is clearly an attitude dating back to Minimalism—to which the formal aspect of your work is often compared (I'm thinking of the zip in Barnett Newman's paintings or the system of linear coordinates in Agnes Martin's)—and geometric abstraction, from Suprematism and De Stijl to Constructivism—to which you often paid homage by incorporating reproductions of famous artworks from the twenties and thirties in your works, using them as support for your drawings and also as actual material for your sculptures (as in the case of Marcels Breuers chair). How are these traditions meaningful to you? Do you see your work closer to one of them?

WG: I'm not sure of that source, but maybe I was referring to finding a way to work. At one point I realized that we live in a very pluralistic time, and for me rather than starting with an "anything goes" attitude, I needed to exclude many of the options. This wasn't a decision about formal things—or reduction for visual reasons—though it might look that way, but reduction related to structure. If one has things to work against that can be productive.
I've used a lot of images in my drawings--they are pages from a variety of books—so while I might be interested in some of them, I wouldn't invest so much into any particular source.

SS: In your work abstraction is a manyfold concept: it addresses the formal aspect of your artworks, which comprise essential graphic elements and appropriated images (abstracted from their original context); the disappearance of the author behind a multiplicity of references and citations and, finally, the immateriality of artistic labour, which derives from the choice of your mode and media of production. Which of these aspects do you find most relevant? How would you describe abstraction as a term pertaining to your work?

WG: I think you've done an excellent job describing abstraction as a term pertaining to my work!

SS: The use of technology in the production of artworks has generally been privileged by artists whose interest was to achieve a formal perfection devoid of any trace of their own intervention. You decided to force the capacities of the mechanical tool you have chosen to produce your works—a common computer printer—in order to do a job for which it was not expressively designed for, printing on large format canvases. This resulted both in the need for you to accommodate the technical capacities of your tool (by folding the canvas, pulling it out of the printer, re-printing it as many times as needed to obtain the intensity of colour desired) and in a series of unpredictable malfunctioning of the printer itself, generating the final look of your works (interruptions in colour, distortions in the images, imprecisions in the overlapping layers of colours). How important are these two elements—chance and technology—important to you? Have you ever been disappointed by the unforeseeable results of their interaction?

WG: There is always some form of disappointment in making an artwork. In my case, there is some expectation, an attempt at translation. A struggle for some ideal—but that ideal may not always be clear, and it is likely in transition.
Because of the process with the works on canvas, I must reject or accept whatever the results are.
I can't work back into them after they are stretched like some painters can.

There are moments during the process when I can intervene. I can add layers, but I can't subtract or erase. So inevitably there are tons of rejections. But a rejection one day could lead to a re-evaluation a couple years later and generate a different series. Or a chance event could lead to a repeatable structure.

Silvia Simoncelli is an art historian and independent curator based in Milan and Zurich. She is professor at Brera Art Academy and course leader of the Advanced Course in Contemporary Art Markets, NABA in Milan. She lectures regularly for the Postgraduate Programme in Curating at ZHdK, Zurich. Her research interests comprise the relation between art and economy, institutional critique and art in public space. Recent projects and participations include: Artists and rights in contemporary art, symposium, Artissima, Turin; Visions of Labour, exhibition, Kunshalle Sao Paulo; Who is Afraid of the Public, symposium (together with Dorothee Richter and Elke Krasny), ICI, London, 2013; Performing Structures, exhibition, Wascherei, Kunstverein Zurich, 2012; Deimantas Narkevicius, Revisiting Utopia, special program, Winterthur Short Film Festival, 2011.

Damian Navarro with an introduction by Véronique Ribordy

Power and Necessity of Abstraction in Marx

New Markets and Forms of Capital in Art

Talking about Abstraction… A Conversation with Maria Lind

Beyond Reflection: Radical Pedagogy and the Ethics of Art Sponsorship

A Question of Funding