This second part of the symposium, Institution as Medium: Curating as Instititional Critique?, discussed new phenomena in the art field:the educational turn and a new wave of art education and mediation.

As a rule, the so-called educational turn in the art field refers to the changes that led to the introduction of discussions and symposia,archives and screenings, and new forms of presentation in art institutions. The numerous producers of culture who worked with other social groups and attempted to initiate new formsof knowledge production were generally reproached for such immaterial work since it paved the way for cognitive capitalism. Suchgeneralisations, however, do not make clear that artists were acting on the basis of specific concerns and that they wanted to engage with,and ally themselves with, activists and other discourses. Postcolonial criticism, gender studies, and anti-racist groups often informed thecontents of such new practices.

The shift towards the conflictual field of politics was aspired to inasmuch as it was a matter of introducing new views and perspectivesinto social discourse. Intellectual and social critical debates found a new home in art institutions. Actions situated between art andagitation, and between art and activism, often influenced public discourses. Such appropriation, moreover, led the involved subjects tobelieve that self-empowerment is possible. With the benefit of hindsight, we can see that the conceived counterposition also formed partof a larger arrangement, which was associated with social rebuilding of institutions and with affirmation and including critique.

The educational turn, however, also stands for the attempt to use the most intensive and stimulating means possible to activate theimmobilised viewer in the modern museum.

The idea is to counter the effects of one pedagogic practice, namely, exhibition-making (which involves immobilisation and passivity) with the contrary practice of mediating art (which involves participation and activity). This helps usunderstand the sometimes peculiar animosity between these discourses in the German-speaking world.

Hito Steyerl has recently claimed that the spectatorial positions of self-assurance and that of the project participant are currently being called into question. Steyerl refersespecially to multimedia video exhibitions to argue her case. Political film is seeking refuge in the museum, she further observes, since demanding film programmes are no longerscreened in cinemas as neoliberalism tightens its grip. Steyerl, moreover, sees the art institution situated in former factories while the actual work is now done on a computer athome.

Video installations, whose length and multiple projections overwhelm visitors, address spectators as a fragmented mass or as a scattered, dispersed multitude. Their visual im-pression remains single and fragmentary, lines of sight become unforeseeable, the gaze is splintered, and visitors create their own narrative as they move through the exhibition: "The museum doesn't organise a coherent crowd of people. People are dispersed in timeand space. A silent crowd, immersed and atomised, struggling both with passivity and hyper-activation."1 The imagined sovereign and autonomous subject of the bourgeois public sphere, and the self-forming subject of cognitive capitalism, has changed:"The public under the condition of multitude operates under the condition of partial invisibility, incomplete access, fragmented realities, of commodification within clandestinity. Transparency, overview and the sovereign gaze fade away into opacity. Cinema itself explodes into multi-plicity, into spatially dispersed multiscreen arrangements, which cannot be contained by a single point of view. The full picture, so to speak, remains unavailable. There isalways something missing."2

While Steyerl believes that this constellation can make obvious this very shortcoming and considers the desire for exchange, for a contact zone that is, productive, I am actuallysceptical in this respect. What is it if an overwhelmed, fragmented subject is no longer even deemed able to occupy the position of an informed or to be informed viewer.3 In thevideos shown, unreflected messages are increasingly bound up with a notion of "politics" based on repeated image-based prejudices. Precisely this is what Roland Barthes calledideological, intentional myths. The combination of signs, decontextualised and de-historicised, and, moreover, charged with intentional political attributions, replaces anunderstanding of information resting on long-term and multilayered analyses of different interests. One characteristic feature of this stance is to ignore one's own involvement in global conflict at all costs (one prime example in this respect is the Middle East conflict as an exculpatory [relief of strain] discourse for central Europeans). Thus, the contents ofthe objects of films always matters, as well as their historical references to the specific contexts of display.

Ultimately, Steyerl's observations on the viewer's changed position correspond to the altered forms of address in the so-called public urban sphere and in media space.

Being continuously addressed by film projections alienates addressees from their own mirror image, and turns them in the long term into what the media theorist Christian Metzcalled "the double of his double."4 Since Metz made this observation, this process has intensified considerably, in that tangible and intangible spaces have begun to permeateeach other in hitherto unknown ways due to the development of telecommunications and network media.

What has emerged is a digital dimension of interaction and imagination, with corresponding imaginary communities and imagined part-identities. (Urban) spaces, and social and political spheres, are increasingly influenced by remote effects conveyed by the media; such effects need neither be understandable nor legitimated wherever they had practical consequences.

Here too, the subject doesn’t necessarily occupy a sovereign position, since the subject is manifoldly embroiled in projections and dependencies to which only limited accessexists. In the public and private sphere, subjects find themselves incessantly confronted with image-based projections (in both senses of the word). These projections are splintered, fragmentary, and remain imaginary. What arises in relation to the subject is a quasi-hallucinatory effect.

In ideal terms, subjects visiting traditional exhibitions (with hanging paintings) to a certain extent train attributes that benefit the (inconspicuous) controlled, judgmental, responsible citizen. Visitors who are confronted by a confusing, compelling media exhibition,experience fragmentation, atomisation, hallucinatory excess, and an incomplete narration experience – an interpellation that positions them as overwhelmed and fragmented.

When visiting projects committed to the educational turn, we are addressed as subjects able to participate in some way or another. We educate ourselves and engage indiscussion, communicate amongst ourselves, and enter into contact and networks. These three registers of address exist side by side, however, or, indeed, they overlap.Their implications exist in the most diverse arrangements, both to various extents and remaining open to discussion.

These three registers can be partly set in parallel to Martin Jay’s three scopic regimes of modernity.6

Where do curatorial programmes come into this inventory?

Curatorial programmes are especially committed to the re-evaluation of immaterial work, the imparting of specific cooperative skills, taking action on meta-levels, and project-based work. They are, as such, part of a neoliberal rebuilding of university education.

Indeed, the profession of the curator is a prime example of this new kind of meaningful, or at least project-creating, management,especially since these postgraduate programmes are being increasingly subjected to economic principles in the style of the British system.This would be the starting point for critique in our case. Form and content interact, but form does not equal content. Curiously (andthe world is full of contradictions), it is precisely during the restructuring of numerous universities and universities of applied sciencesaccording to the school-like Bologna model, with its regulated curricula, programmes, and examinations, that a comparatively large degree of freedom of form and content exists within the less regulated postgraduate programmes.

The learning and unlearning of habitus

"Il n’y a pas de hors texte." as Derrida put it. – Right, there is nothing outside or beyond the text, nor beyond or outside discourse. And I do not wish to construe a position contrary to this statement. Nevertheless, it does seem important to me to take aparticular position within the discourse. "Speech is a text, gesture is a text, reality is a text in this new sense." But precisely for this reason, it is not a matter of indifference which position I take as a curator or artist; it always has political implications.

I would therefore like to plead for learning and unlearning the habitus. That is to say, the following issues ought to be negotiated in a curatorial programme: making visible the power of definition, revealing inclusions and exclusions, making evident cultural policy and budgetary conditions, and identifying or unlearning the habitus. 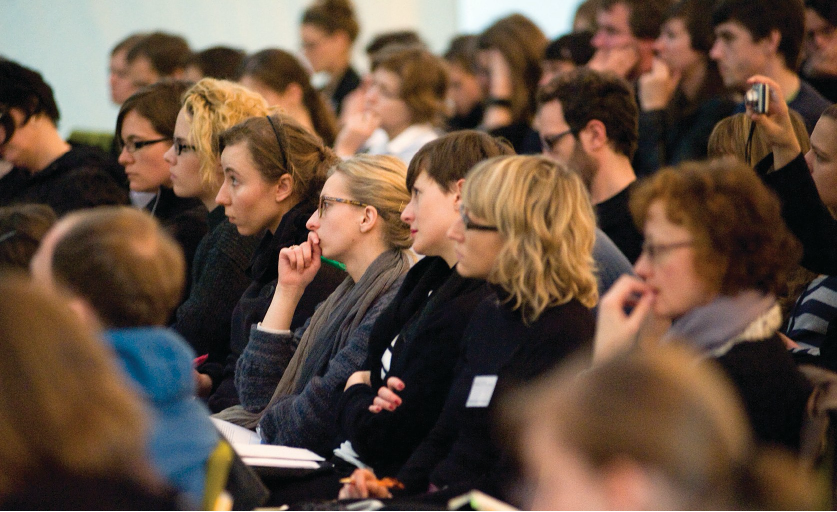 Dorothee Richter is an art historian and curator; Director of Studies for the Postgraduate Programme in Curating, ICS, at the ZHDK Zurich and publisher of On-Curating.org. Prior to that she was Artistic Director of the Künstlerhaus Bremen. She has initiated symposia on questions of contemporary art with thefollowing publications: Curating degree Zero – an international symposium of curators (with B.Drabble); dialoge und debatten – on feminist positions in contemporary art; Im (Be_)griff desBildes (with Katrin Heinz and Sigrid Adorf); die Visualität der theorie vs. zur theorie des Visuellen (with Nina Möntmann); re- Visionen des displays, (with Sigrid Schade and Jennifer Johns);Institution as Medium. Curating as Institutional Critique?, Kassel (with Rein Wolfs), teaching: University of Bremen, Ecole des Beaux Arts, Geneva, Merz-Akademie Stuttgart; UniversityLüneburg, Zurich University of Arts. She initiated (with Drabble) the Curating degree Zero archive, an archive, travel- ling exhibition, and website on curatorial practice (www.cu- ratingdegreezero.org). Other editions: Curating Critique (with Drabble), editor of the web-journal On-Curating.org. She is curator of new social sculptures in cooperation with the Kunstmuseum Thun and students of the Postgraduate Programme inCurating.

3 This scopic regime that is  described here by Hito Steyerl partly resembles the regime named by Martin Jay, the baroque regime: "If, however, we turn to a third model of vision, of what can be called the second moment of unease in the dominant model, [...]. [...]the baroque connoted the bizarre and peculiar, traits which were normally  disdained by champions of cla- rity and transparency of form." Later he points  out  the    "Ex- plosive power"  of this scopic regime. Martin Jay, "Scopic regimes of modernity." In Hal Forster, ed.,Vision and visuality, The New Press, New York, 1988, p.16.

The second part of the publication for the symposium, Institution as Medium. Curating as Institutional Critique?, organised by the Kunsthalle Fridericianum and the Zurich Postgraduate Programme in Curating (Institute for Cultural Studies, Department of Cultural Analysis, Zurich University of the Arts), deals with notion of art-mediation and addressing publics in the realm of institutional critique. The question remains: how can a practice that intends to radically show the conditionality of art, its financial entanglements, and its function as a means of distinction, be related to institutions and curators’ activities therein? Is this not a contradiction in terms? The aim of the symposium was to explore these contradictions, as well as the possibilities and limitations of critical curatorial practice.

by Dorothee Richter and Rein Wolfs

Crisis as form. Curating and the logic of Mediation.[1]

Self-Institutionalisation: Who, in what kind of system?

by Giovanni Carmine and Hassan Khan

by Marysia Lewandowska and Neil Cummings

Institutional Critique and the City Museum of Tel Aviv

by Maja Ciric and Isin Onol

Can Curating be Taught?