Avi Feldman
After the Law: Towards Judicial-Visual Activism 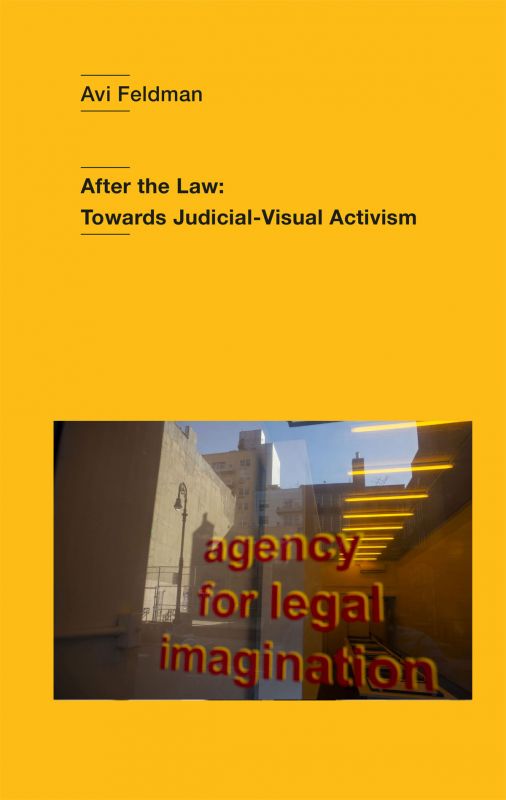 Law and art are oftentimes perceived as standing in opposition, and even seen in terms. The first is dismissed as provincial, rigid, and bureaucratic, while the latter is repeatedly characterized as global, flexible, and dynamic. Yet, closer observation and analysis reveal hidden links and layers, and substantial preoccupation by both legal and art practitioners in the visual and in the judicial. It is through the unraveling of spaces, gaps, and lacunae in which both fields of practice and knowledge intersect that this publication sets in motion an exploration of influences and interactions between law and art.

Offering a new critical approach and methodology to deal with existing and imagined relations between law and art, this publication analyzes curatorial and artistic projects by revealing overlooked legal dimensions embedded within them. It introduces legal theory and scholarship in relation to visual artworks in order to expand and foster new paths for both judicial and visual activism. Based on the reassessment of artistic and curatorial capabilities and encounters in a time of globalization, it is concerned with broadening our perception of the role of art and legal practitioners with regard to justice.

Following an introduction of Nancy Fraser's three-dimensional concept of justice, and Saskia Sassen's notion of capabilities in a world shaped by the dual existence of the nation-state and globalization, Chapter One focuses on the 7th Berlin Biennale as a curatorial case study for political and artistic activism, and on “Artist Organisations International” (AOI) as an example of artist-created institutions concerned with political activism.

Two artistic projects that premiered during the 7th Berlin Biennale are then critically examined in Chapters Two and Three. An in-depth exploration of Yael Bartana's First Congress of The Jewish Renaissance Movement in Poland (JRMiP) as a space prompting global justice is the focus of Chapter Two. The building of a Parliament in Rojava by Jonas Staal's New World Summit (NWS) as an artistic reinvention of the Right of Intervention is the concern of Chapter Three.

Judicial-visual activism is further developed in Chapter Four through an inquiry into the theory of the emergence of disputes, and the Right of the Encounter in relation to artistic actions taking place in state institutions. Chapter Five contains a reflection on my own recent curatorial projects dedicated to encounters that I facilitated between legal and art practitioners. The result of these encounters led to the exhibition Motions for the Agenda structured around five motions/projects developed in a collaboration between the participants dealing with legal texts and documents, just as with the place of law, its language, and its archive.

Avi Feldman (PhD) is a curator and writer based in Tel Aviv, Berlin, and Dresden. He was the 2018 curator in residence at Ludlow 38, the MINI/Goethe-Institut Curatorial Residencies program, NYC. Feldman is the founder of The Agency for Legal Imagination, which is an independent organization devoted to the investigation of existing and imagined relations between legal and artistic imagination, and visual activism and legal activism. The Agency started operating following a residency, workshops and exhibition at Artport Tel Aviv (2017).

PhD Publication Series
This publication is based on the thesis and exhibition completed as part of the PhD in Practice in Curating Program, a joint doctoral program of the Zurich University of the Arts and the University of Reading, supported by “swissuniversities.”

The rights of this publication remain by the author. The publication is openly accessible on the website www.on-curating.org and can be downloaded and shared under the restriction of crediting the author and/or OnCurating.org.

The Publisher is granted a non-exclusive right of use in respect of the online  publication of the work without the obligation to make use of this right. The Author is entitled to make a PDF version of the work publicly accessible online via his/her personal website, an institutional server or a suitable subject-based repository once it has appeared in book form. This usage of rights is in compliance to the requirements by the of Swiss National Science Foundation (SNSF).